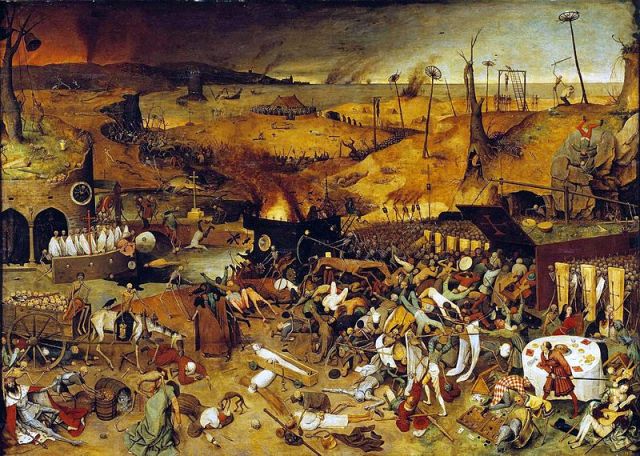 Of course the old Saxon word means Hallow Even, the Eve of All Hallows, the Vigil of All Saints. The Germans still say Heilig for holy or saint. But we must not forget that All Hallows and All Souls have been planted on the ground of the old pagan feast of death. Many people in this country who are not practising Catholics will still visit the cemeteries and honour the departed. Cremation is still relatively rare here, though bodies are typically buried for thirty years before either the concession is renewed or the remains are put into the charnel house of the cemetery.

Here in France, some of the customs have been imported from England and America, and children dress up as witches, zombies, Dracula, Frankenstein and every other macabre figure. Though many of us might not admit it, we are all drawn to the “dark side”, the macabre and the image of death.

Usually, nowadays, it is the taste for horror films, stories of serial killers and their execution on the gallows or the electric chair. From the dawn of history, humanity is preoccupied with death and the macabre. The image above is a vision of hell on earth – murder, executions and torture, atrocities, disease and horror.

Too much of an obsession with the “dark side” can be a sign of mental illness, but more moderately, it is natural. It is also a catechetical way to remind people that death and evil exist, and that these realities have to be accepted and enlightened by the order of divine grace as light dissipates darkness. There is also the eschatological theme in the liturgy as we approach Advent. Here in the northern hemisphere, the days are growing short and the cold gains over the last remnants of the summer. Man in the middle ages allowed himself to have fun as he purged away sin and darkness, a different spirit from that of the reformer and those who harp on about the decline of faith and morals.

Surely the feasts of All Saints and All Souls enable us to sanctify the old pagan feast, and forms yet another example of going gently with people when imposing Monotheistic orthodoxy. Christianity has always been a balance between the old feasts of fertility, life and death and their full realisation in Christ.

So watch out for the fangs that go “munch” in the night!

This entry was posted in Uncategorized and tagged Events of the year, Liturgy. Bookmark the permalink.