In my posting of 5th March, Towards the Unknown, I mentioned an individual described by the secular press as a fake bishop who tried to infiltrate himself into a pre-conclave meeting of Cardinals. I made fun of the individual mainly on grounds of his mistakes in terms of dress. Actually, the man’s name is Ralph Napierski, a German who appears to have received vagante ordinations.

I decided to do a little research, and found this fellow had been consecrated, by a German bishop called Athanasius Seiwart, himself consecrated by one Jean-Gérard Roux. Roux claims, on the basis of lies and false documents, that he was consecrated by Archbishop Pierre Martin Ngô Đình Thục personally in a place called Loano in Italy. A witness affirms that the Archbishop was in Munich on the day in question! What more needs to be said? Roux is a fraud known to the French authorities and has a rich criminal record to his credit. Such a record would not invalidate the transmission of Holy Orders, if Roux received them validly from someone, but this is not someone we would want to invite to dinner.

To substantiate my position on Roux’s consecration, I quote the words of Dr Eberhard Heller in Einsicht – Röm.-Kath. Zeitschrift, December 1993, page 95.

I have also seen a dated video of his priestly ordination in November 1985 by Bishop Jean Laborie – and this also refutes his claim to have been consecrated by Archbishop Ngô Đình Thục. I read reams of material about 14 years ago provided by an acquaintance who lives in Nice, and I still have much of it in my archives mouldering away in a cardboard box in my loft! There’s nothing personal: I just hate to see this kind of person besmirching the credibility of Christianity.

The above photo is Napierski in Roux’s chapel in France, at La Ferté Gaucher, some way to the north-east of Paris in the Seine-et-Marne near Meaux. A site still exists – Abbaye de Marie Reine – but is “closed for administrative reasons”. Perhaps Roux can still be found on Facebook if you’re interested. I’m not.

Roux has had himself photographed with Pope Benedict XVI, unless the photo was a Photoshop job, which is not difficult. I guess the photo was taken in the Paul VI Audience Hall, but how the heck did this creep do it? What is even more ironic is that Roux is an on-and-off sedevacantist! 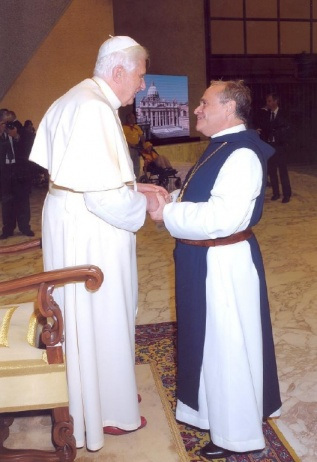 Napierski’s consecrator, Seiwart, claims to have been reconciled with Rome and accepted as a valid bishop. I don’t believe that. Rome never takes back “apostate” clergy. Seiwart got himself “in” with Pope John Paul II. He is wearing Mass vestments and it is clearly a Papal Mass in St Peter’s Square, so I suppose concelebrating clergy are not required to show credentials called a celebret, what we Anglicans call a canonical licence. Of course, Rouxs’ forgery department and department of dirty tricks might at last have found a way to do a good job on their papers! 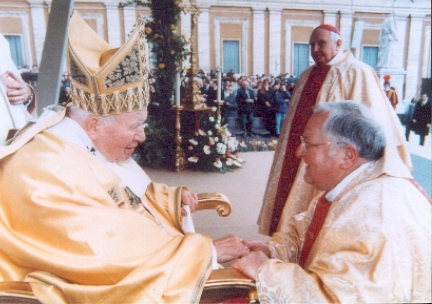 Now, Naperski describes himself as a bishop in communion with the Roman Catholic Church – katholischer Bischof in Union mit der römisch-katholischen Kirche. How do these guys have the cheek to do this kind of thing? They might have got valid ordinations from somewhere, as I did to my shame, but with claims to be genuine Roman Catholics, they are indeed fakes and frauds. They discredit many independent Old Catholic and other Sacramental Christian clergy with genuine vocations.

These bandits are not the only ones. There is also a bishop by the name of David Bell who also somehow gets into Papal Audiences and Masses.

If there are any accusations of libel, they should be addressed to my source of information – The strange case of “His Eminence” Bell.

But who is David Bell and what is the Roman Catholic Society of Pope Leo XIII really? Bell is a forty two year old Englishman who was ordained priest and then bishop within the Brazilian Catholic Apostolic Church (ICAB). ICAB is a group that was created in Brazil during the 30’s and was made up of priests and a bishop who did not want to follow the teachings of Pius XI against communism. Over the years, ICAB has adopted certain old Catholic positions, refusing to recognise the dogma of papal infallibility imposed by the Second Vatican Council and opening up to the idea of priests being able to marry. Today in Brazil, the ICAB has a number of bishops and communities which celebrate new marriage ceremonies for divorcees who wish to remarry.

It was ICAB’s superior, the elderly “patriarch” Luis Fernando Castillo Mendez, inappropriately referred to as “cardinal”, who consecrated Bishop Bell in 2006, proclaiming him “cardinal” in 2009, shortly before he passed away. Mendez had been in contact with the Holy See at the end of the 80’s but had not yet accepted John Paul II’s outstretched hand.

A video of Bell’s consecration ceremony is available on YouTube. Both the international and Italian Society of Pope Leo XIII websites regularly publish photographs of Bell kissing the Pope’s hand during one of the Wednesday Audiences in June 2011. There is even one image of the bell and another bishop from the congregation apparently co-celebrating mass in St. Peter’s Square.

Bell is undoubtedly a valid bishop, but he is a false Roman Catholic, hardly a way to endear himself to the instances of the Sacred Congregation for the Doctrine of the Faith for his reconciliation. The quote article points this out clearly. The problem is not being an independent bishop, but pretending to be what one is not!

The latest rascal is Ralph Napiersk gate crashing a meeting of Cardinals, at least for the purpose of getting himself photographed with them for the purpose of getting false credentials.  Get Religion links to various versions of the story. Napierski’s site is Corpus Dei, and he shows us what he’s got or claims to have. It’s strange the site is in English and not in his native German. The reason is not given.

I will end this unsavoury subject by a few reflections. Men like these cause all independent priests and bishops to be tarred with the same brush and called fakes and phony. That has been going on for a long time with the famous books by Brandreth (Episcopi Vagantes and the Anglican Church) and Peter Anson (Bishops at Large). I remember reading Anson’s evaluation of Freidrich Heiler, a man he respected on account of his intellectual achievements. Most of the others were aping something they were not or were at the limits of honesty to understate it.

I have written articles under the category Independent and Old Catholicism, and I am still sympathetic to the idea of independent sacramental communities in which the Church can subside through the Priesthood and the holding of the full Apostolic Faith. A community might be one priest or bishop and a handful of laity, or he might belong to an organised Church like one of the Continuing Anglican bodies. There are communities that identify with orthodox Catholicism whilst being honest about not belonging to the Roman Catholic Church. There is no problem there.

The problem is being a “wannabe” Roman Catholic and setting out to imitate what one is unable to become. This just plays into the hands of apologists and polemicists of all kinds. The “blood-crazed ferret” Damian Thompson wrote Wandering bishops, grief-crazed Lib Dems… and Hillary Clinton’s Croydon facelift some time ago. It isn’t flattering. Who can blame him when you get the more honest bishops doing a Post the Host service and other shenanigans? It is heartbreaking.

I tip my hat to the blog Bože!, which inspired me to look into the case of Napierski and write this article from my own perspective. Bishop Alexis, who runs this blog tells of his painful awareness of the proportion of men in the independent sacramental world who are either mentally ill or suffer from some personality problem like narcissism. He points out that the mainstream churches also have bad clergy. Alexis’ approach is praiseworthy, which consists of blogging, researching and writing and putting a positive side to a spiritual world that is not well known, and against which the bad eggs bring adverse publicity. This is also one of the purposes of this blog – dispelling ignorance and prejudice through education and reasoning.

But, some characters are indefensible and show nothing to condone!

This entry was posted in Uncategorized and tagged Independent / Old Catholicism, Religious pathology. Bookmark the permalink.