The Judgement of the World 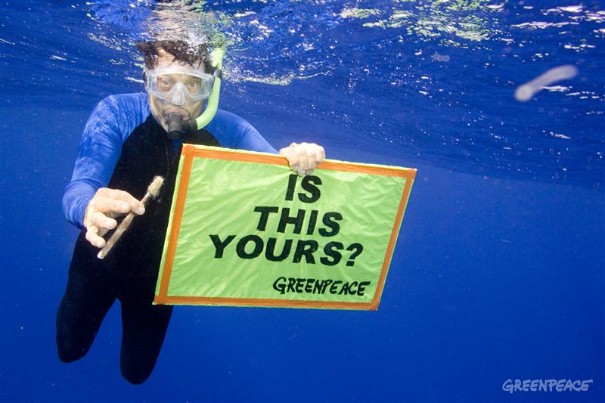 This is only indirectly germane to this site, but it is a fact that will relativise many of the ideological arguments between us on the blog.

Take a look at The Trash Vortex. Where I live, Tuesday is what my wife and I call La Sainte Poubelle, dustbin collection day. In our village, we have the “normal” rubbish in black plastic bin liners, “recyclables” in translucid yellow plastic bags and we take the glass bottles ourselves to the bottle bank. We have to take more bulky stuff and metal, together with domestic machines that don’t work and can’t be repaired, to the municipal dump. So, there is an effort made in sorting all the stuff so that it will be burned, decomposed with chemicals, recycled in special factories, all sorts of processes. We have become more conscious of this problem since environmentalism became a part of “political correctness” – in this instance rightly so.

Yet a big percentage of indestructible plastic ends up in the sea, a small amount from boats and oil platforms, but mostly from the land. Deliberately dumped? Who knows? Whatever, this stuff is killing fish, sea mammals and birds. The trash vortex is the size of Texas. Every time I take my boat out on the English Channel, there are bits and pieces. I take a shopping bag with me, and catch a few bits of rubbish if I can get close enough, and put them in the bin when I put in on the shore. I ask myself what’s the use. Will it all end up back in the sea?

What goes into our dustbins? Mostly, it is the packing materials we buy our food in at the supermarket – all plastic and polystyrene. Every week, there are heaps of the stuff to put in the dustbin and have taken away by the refuse men. Multiply that quantity by the number of persons living in my village. Compressed, it takes the space of a whole lorry – every week, every year. And there has only been plastic in mass production since the 1950’s. European regulations require the packing of food in this type of container on grounds of hygiene. Domestic appliances are made according to principles of planned obsolescence. It works for the warranty period, and then it can’t be repaired for less than the cost of a replacement product. So the old one is thrown away and you buy a new appliance – fridges, cookers, dishwashers, washing machines, you name it. Then we have the old tyres and used oil of our cars – that really gets me going! Washing machines can be repaired, but we have to do it ourselves and find spare parts via the internet and that sort of thing. It’s usually the solenoid valve that goes, or the machine is full of calcium deposits. It’s laborious, and most modern people can’t be bothered with doing a job the old-fashioned way.

This is the reality of the capitalist – consumer world. It’s all big money for someone who hasn’t a care for anyone or anything else.

Perhaps the world will survive us – just a couple of million years for the plastic to decompose after the extinction of mankind – nothing compared with the time the earth has left before being frazzled by the sun when it becomes a supernova. That would be a few billion years. Mankind could come to a sticky end – probably through starvation and disease, out with a whimper. We will have consumed everything we can grab – and will have replaced it with stuff that kills the very natural life we won’t be able to eat. These reflections don’t exactly put me in a good mood!

We can pray, get people to join our “true churches”, something that becomes a cruel joke. Some of us might become Greenpeace activists. I’m not really into political activism, but evil comes about by good men doing nothing. At least, we can pause and think what we are doing to ourselves and the planet Earth as if there were no tomorrow. Some conservative Christians upbraid liberals for being concerned about the environment, but the reality is there.

I have no real conclusion. We can’t all afford to buy food from traditional grocery shops that wrap their products in paper. We have no control over our rubbish once the dustbin men take it away. We can avoid throwing trash out of our car windows or boats, unless it is organic like an apple core or a bone from a piece of meat. Every little bit adds up to that incredible “continent” of plastic crap in the middle of the ocean.

We can do what we can, which is very little, but I really hate the ideology that produces the problem – the few getting rich and to hell with the rest! We can at least think about it, and that will be a part of knowing whether the Christian Gospel is really a part of us or just another ideology.

This entry was posted in Uncategorized and tagged Ecology, Environment, The Sea. Bookmark the permalink.

2 Responses to The Judgement of the World