Following on from my previous article, it occurs to me that I have never shown my tuck box chapel. A schoolboy’s tuck box is perhaps his most important piece of standard equipment at an English boarding school. It goes with the schoolboy’s trunk which contains his clothing. My parents bought it for me in 1972 when I went to St Peter’s in York.

Every boy in an English public school (private boarding school like Eton, Harrow, Charterhouse, St Peters in York, Cheltenham College, etc.) has his own tuck box, a robust wooden container that can be locked. They were originally used for storing supplies of food and sweets, but they are actually used for personal belonging like books and games, letters from home and photos. Nowadays, a boy has a laptop and a mobile phone, and they lock more securely than the ones we had!

By way of a brief digression, going to boarding school was a wise decision of my parents. It was emotionally hard, but it gave us independence and brought us to make more efforts to socialise. It even brought us to appreciate home and family life much more. I am grateful to have had such an education. The tuck box was the only privacy we had, a symbol of our secret loves and longings. After I left school, I used my tuck box for woodworking tools and it lay disused for some years in the attic at home. When I was ordained a priest, I considered the possibilities of making a portable chapel. My old tuck box was the obvious solution.

The folding table just under the lid is attached by two hinges. It lifts up for access to all the things needed for Mass like the altar cloths, vestments, chalice, candlesticks, etc. This is one possibility for saying Mass in a private home or even on the tailgate of my van. When it is placed on an ordinary domestic table, it is just the right height for saying Mass.

Tuck box with everything packed in it 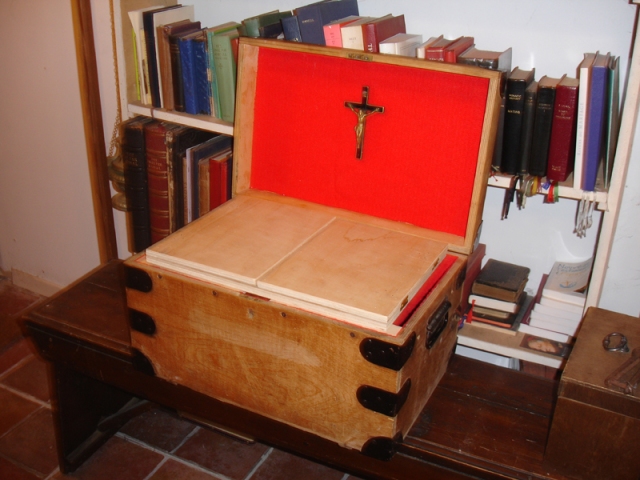 Tuck box with the lid lifted showing the crucifix fixed to the inside of the lid, table folded.

Tuck box with the table extended 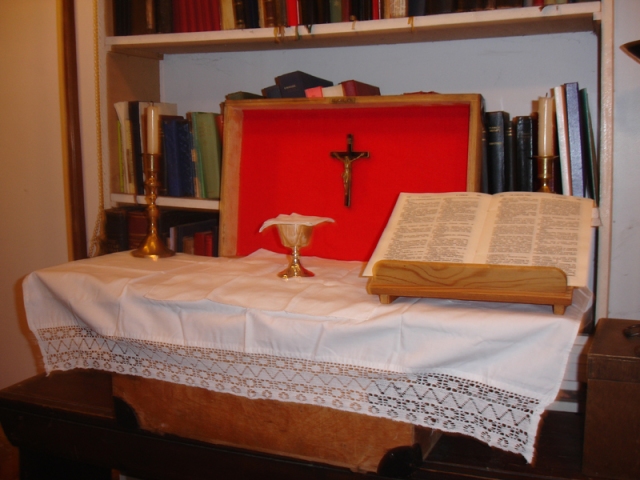 Tuck box chapel ready for use

This entry was posted in Uncategorized and tagged House group ministry, Liturgy. Bookmark the permalink.