The Churches the Baroque Forgot

I am just back from Brittany and a fine two-week holiday of sailing and visiting. One thing we found surprising here in west Brittany is the good condition of the many fine medieval churches and a relative absence of baroque “accretions”. Perhaps my title is a little misleading because the first photo of this series, the Lady Chapel of Pont l’Abbé, is full seventeenth-century baroque. This church is full of surprises as many in this part of the country are. Perhaps Brittany remained poorer than other parts of France, and things happened more gradually. The architecture of the Breton medieval church is very “English” with the squared-off east wall and great window over the altar. In most parts of France, the east end of a church is finished off with an apse.

This little account with photos is incomplete and shortened, as we visited many more churches and chapels. One particularity of Brittany churches is the enclos, the close like round many English churches and cathedrals. It is a piece of land on which the church stands and surrounded by a wall. In many places, the wall has gaps and low wall over which a person can stride like a stile between two fields. This was originally to keep animals out of the church.

Here is the east window of Pont l’Abbé over a modest baroque altar, crying out for riddle posts and curtains.

The pulpit is a complete catechism in carved wood, the quintessence of the Counter Reformation.

The next day, we went to Quimper and visited the cathedral, heavily restored in the nineteenth century. I rather like the baldachino over the high altar which fits in well with the late gothic architecture. It is a pity to see a choir full of chairs and the ubiquitous table in front of the altar for facing-the-people celebrations. 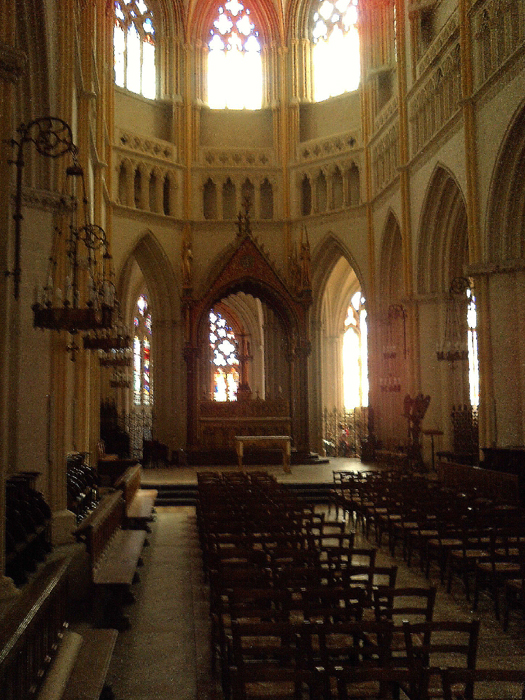 A close-up of the high altar. 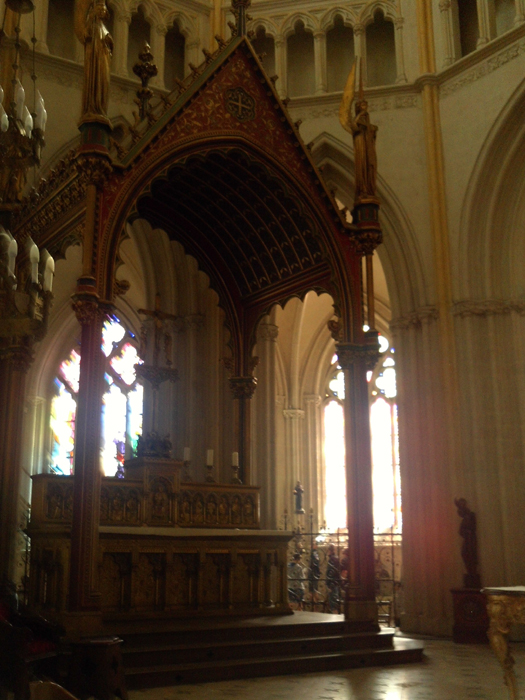 Most of the side altars were typical of the French nineteenth century, geared to particular devotions, but this one looks fairly fifteenth-century-ish.

Some days later, we visited a couple of extraordinary churches. One was Notre-Dame de Tronoën on the coast. It has one of the most sumptuous calvaries of Brittany shown here.

Bell towers in Brittany have to be small with many gaps to allow the heavy west winds from the North Atlantic to pass. Many of these these bell towers are supported by the chancel arch.

This enormous altar reminded me of Coventry Cathedral. It was not originally an altar but a kind of offering table situated outside the church. It is too long for this sanctuary and is out of all proportion.

This is the piscina as found in most medieval churches, a shelf for the cruets and the hole through which water flows directly into the earth.

This side altar looks medieval, and unfortunately had a big chunk broken from it at some time.

This entry was posted in Uncategorized and tagged Church trappings. Bookmark the permalink.