When the boats are laid up…

What do we sailors talk about when our boats are laid up for the winter?

Good use of Facebook can make it so different. I put out a New Year greeting showing the photo of John Wesley and I side by side, wearing Anglican choir dress (bands, surplice and tippet) and our long hair. You can find it in Nowhere near his holiness…

Of all people, one of my “friends” (I have every reason to believe he could become a true friend), Roger Barnes, has been commenting. He and I have agreed to meet up at the Semaine du Golfe (in which both our boats are registered in flotille no. 2) and probably also at the Route du Sable. He is an architect and a remarkable writer. I warmed immediately to the spirit of freedom and personhood he conveys in anything to do with the Dinghy Cruising Association, his books, articles and the Internet.

I have tended to go softly on religion on the sailing forums and so forth, but some sailors have a view on life that stands out from the crass materialism and sheep-like mentality of our times. Perhaps it is the solitude of the sea, the fact of doing something for ourselves, interacting with nature and the elements.

Roger noticed that unlike Wesley, I was wearing a Roman collar. This led to a conversation:

Anthony Chadwick – There are the bands under the Roman collar, but not easily visible on the photo. Also, I don’t have the same curls in my hair as Wesley (who didn’t wear a wig even though he lived in the 18th century), just what I get naturally! Actually, I find the Roman collar very uncomfortable, made of hard plastic as they are. Some kind of white scarf would be better with either the jabot or the bands. That being said, you won’t find me dressed like that in my boat!!!

Roger Barnes – I see the bands, but Wesley’s emerge from the top. He also used curling tongs, presumably.

Anthony Chadwick – Like the French rabat. Curling tongs and anything hot are bad for the hair. I leave mine natural except tying it up in something like a ponytail for practical reasons (like sailing…).

Roger Barnes – My client Michael Eavis believes that his Glastonbury Festival is an example of applied Methodism. I wonder what Wesley would think?

Anthony Chadwick – I find the comparison difficult. Methodism seemed to be about getting back to spiritual roots and bringing Christianity to the working classes, being more radical than the Establishment. I am not a Methodist myself and come from an Anglican background, but I have a lot of esteem for them. Some people make their mark by being good to others, and I need to read more about Michael Eavis to discover the mark he makes on his world.

Roger Barnes – One of the central planks of the Methodist critique of mainstream Anglicanism was the idea that ordinary people were intrinsically good and capable of taking control of their own lives. So Michael believes that if you put 175,000 people in a muddy field for a week with only minor policing and very minimal plumbing they will be very happy and very good to each other….

Anthony Chadwick – You don’t have to be an open boat sailor to understand such ideas, but it helps!

What really interests me is this reflection that “ordinary people were intrinsically good and capable of taking control of their own lives“. This resonates within me as the antithesis of the Inquisitor of Dostoyevsky as the symbol of those who believe that humanity can only be evil without the tight reins of authority and oppression. This is true anarchy, not being anti-social or making other people’s lives miserable, but being truly ourselves – even in society. I have had this experience with boating people, preferably in boats propelled by sail and oar, no engine.

Methodism was the perfect response in the eighteenth century to the Establishment as was William Blake to the Industrial Revolution and Capitalism. It represented men and women moving on and taking their own lives in hand. In the same way, we are called to bring out the best in human nature which is based on empathy, care for others and an intrinsic sense of right and wrong. Many of us in churches and with religious concerns miss these points that are so obvious to many people who do not share these concerns. It is my hope that Continuing Anglicanism, after its tumultuous beginnings, will fulfil this role in our own time like Methodism did (and still does) in previous eras. We need to give our lives to prayer and the life of the spirit, do things in simplicity and love and bring God’s gifts to the little ones of this world. I see every sign of this in our Archbishop and my Diocesan Bishop, and in many of my fellow clergy. May this be so, and this is my wish and hope for 2015. 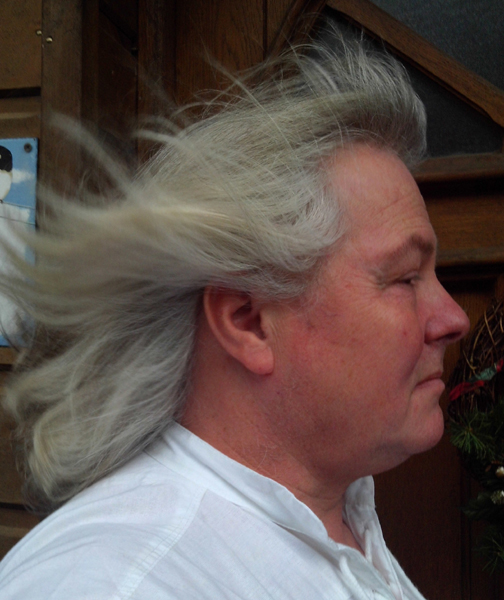 Oh, and by the way, I think I will replace that awful plastic collar with some kind of fine white scarf in cotton and wear bands as Wesley did when in choir dress. These are only details of dress and personal taste (even in matters of our clerical “uniform”), but which are so full of meaning.

Please be indulgent for my “selfie”, but this is my blog after all!