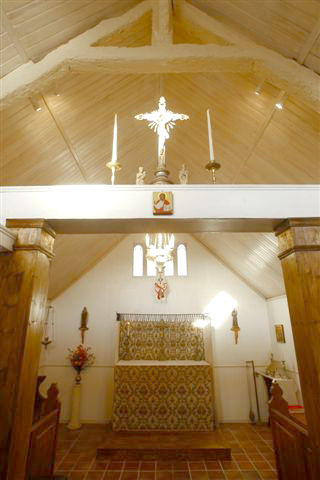 My organisation of Holy Week is taking shape with the visit of Roger Barnes to our sailing club on Holy Saturday, where he will be giving a talk on dinghy cruising. As I mentioned earlier, dinghy cruising is only beginning to be recognised by such organisations as the Royal Yacht Association as a true sailing discipline. The word needs to be spread in France as well as in England.

This has to displace the Paschal Vigil on Holy Saturday to the morning. After all it is the timing in use for a very long time before we became accustomed to doing it in the evening of Holy Saturday! O beata nox in the morning sunshine seems an anomaly, but that is how it is.

I will be collecting Roger from the seaport of Caen very early on Maundy Thursday morning. The only way to do it is to go there the evening before and camp in the van. It would be indiscreet of me to speculate about his religious convictions or affiliation, but I do know that he is interested in coming to my Holy Week ceremonies. He is a man of the sea, a contemplative after my own heart!

There will the Maundy Thursday Mass in the evening, which in the Use of Sarum has the character of a Mass in Passiontide. Only the Bishop says the Gloria. The second and third hosts consecrated at this Mass are put into the hanging pyx and the Easter Sepulcre is used from the Good Friday Mass of the Presanctified to just before the Mass of Easter Sunday.

I will be celebrating in English using the Warren translation. Some sung parts, like the Exultet, will be in Latin with the old Sarum chant.

The programme is as follows, all according to the Use of Sarum:
29th March – Palm Sunday: Blessing of Palms and Mass (Latin) in the morning

30th and 31th March and 1st April – Monday and Tuesday of Holy Week, Spy Wednesday: Mass (Latin) at some point during the day.

2nd April – Maundy Thursday: Mass (English) of the Lord’s Supper in the evening

3rd April – Good Friday: Mass of the Presanctified (English) in the afternoon

5th April – Easter Sunday: Mass (English) in the morning after having put the Blessed Sacrament into the hanging pyx from the Easter Sepulchre.

I would be extremely surprised if anyone else turned up, but those who happen to be in the area would be most welcome. Some prior warning would be appreciated.

This entry was posted in Uncategorized. Bookmark the permalink.