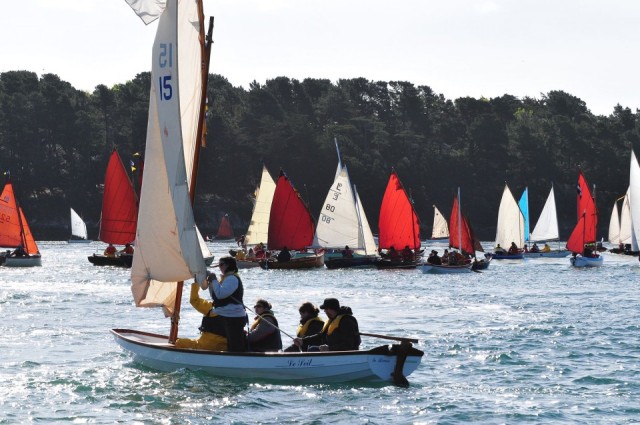 I will be spending about half of May away from home, and the 11th to the 17th offline – in my boat at a huge gathering in Brittany, the Semaine du Golfe, of more than a thousand vessels from three-masted ships to dinghies like mine. I am presently going through the list of everything from my Swiss knife to my various boxes representing the ship’s workshop, the bosun’s kit (repairs to the sails and minor damage to the hull), the galley, captain’s cabin (another plastic box with navigation equipment and personal things), fo’c’sle containing the anchors, warps, fenders, bucket and bailer, etc., dry bag for clothes and bedding and essential equipment for the boat. It is a detailed and meticulous job and nothing is to be forgotten. During that week, I am offline and accessible only by mobile telephone and VHF radio. We will be a load of grown men playing at schoolboys! I think it will be good retreat, with my breviary and some spiritual reading in my waterproof “captain’s cabin” box. There will be contemplative early mornings whilst those sleeping at a campsite arrive at their boats by bus. Some of us are camping in our boats, and will be drinking coffee as they rush around like chickens with their heads chopped off!

I had a pleasant letter from a reader about the scourge of clericalism. He mentioned some of the things discussed on blogs. Indeed, a lot of what is being discussed is quite sterile, for example calling modern theological tendencies by the names of ancient heresies like Nestorianism or Pelagianism. There may be some characteristics in common, but there is an entirely different historical context. This annoys me about as much as reading about the way Gregory the Great or Pius X answered the issues of the Novus Ordo or paedophilia in the clergy!

I am profoundly alienated from the Roman Catholicism in which I was a little more than a guest for about 15 years of my life. Its clericalism taught me to recognise the same thing in every human collectivity in which there is a pecking order. We humans are not unlike many species of social animals that establish their hierarchy of dominance. The nastiest and strongest gets the top of the hog – and in this way, Nazism was the quintessence of human nature. The same paradigm is emulated to a less extreme extent in all bureaucracies and political parties, all the elites. What Christianity seems to be about is reversing that fatality – and any monotheistic religion that favours “might is right” – and bringing out empathy, love and kindness. In the thoughts of many martyrs as they faced their deaths – If love has no place in this world, then I want no part in it.

Any institution goes the same way. I find an even more clerical outlook with the left-wing agendas, the female clergy being especially sanctimonious and lacking in empathy. François Hollande’s socialism in France is all about the vested interests of the elite and the plutocrats, and there is plenty of talk about issues going through the meat grinder of steering committees and this and that – and nothing being done to address issues of things like unemployment, homelessness and unaffordable housing.

We live in a grim world. Some write about what they would do if they were King of England for a day, to which I sent a comment about the Invisible Empire of Romantia and the dotty ladies who invented it. Here’s some of what they published in the 1990’s. As something of a Romantic myself and attaching great importance to man’s creative imagination, I find that escapism on the Isle of Cocaigne is a necessary part of us. We all like fantasy films and books. I certainly do, but too much of anything isn’t good – like a good vintage Port or a bottle of Cognac.

I try not to think too much about the state of the RC Church. Pope Francis apparently has his good points, but he makes me think of Obama in America and Hollande here in France. He got to be Pope because he was able to pull the right strings. He would certainly know a lot about the Ratlines of 1945 and much more about how the Vatican Bank started raking in the dosh. Who knows? My country had a bad time with his, back in 1982 over a territory whose entire population other than two Argentinians wanted to remain British. Have no illusions. All I wait for is something like what happened in Russia in 1989, a system reboot and a chance for humanity to establish itself on a new basis. France’s elites went to the guillotine in the 1790’s and then the extremes like Danton and Robespierre killed each other off. Something along the same lines will happen again, though I would never wish for anyone’s death. Something needs to change.

I have lots to do now, things like boat lists, the spare wheel of my caravan and interior fitting – and some translating work. so I’ll close.

This entry was posted in Uncategorized and tagged Reflections. Bookmark the permalink.