Up and Down the Canal

I returned today from my little weekend on the Somme, see previous article. The descriptions are under each photo. 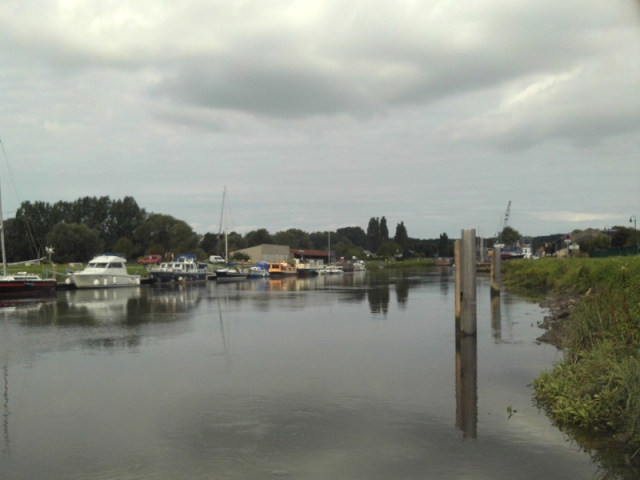 I am moored just upstream from where I launched upstream from the main lock at Saint Valéry sur Somme. There was quite a current due to the periodical flushing of the estuary with millions or billions of gallons of water from the canal. This process took place from 10 am on Saturday and the great sluices were shut at about 4 pm, a couple of hours before high tide. Without wind, I would not have been able to row against the current, so had to moor and wait. At about 11 am, there was at last some wind, and was able to set off with jib only and rowing. That got me under the first bridge, which allowed my mast under with some inches to spare. 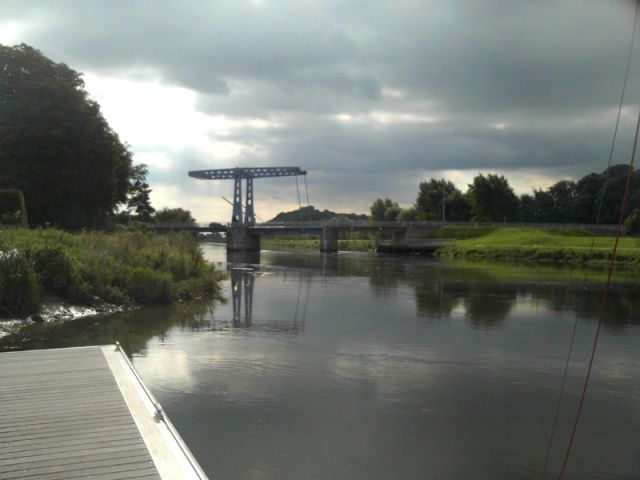 This is the lift bridge, quite a piece of civil engineering. To save having to stop the traffic, I was able to get under the right-hand span with my mainsail down. 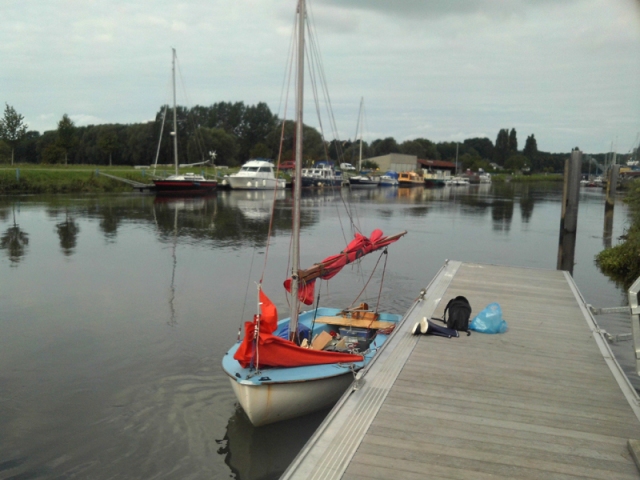 Here is Sarum moored as I waited for wind to get me going up the canal. Though the current was against me, the wind would be favourable. 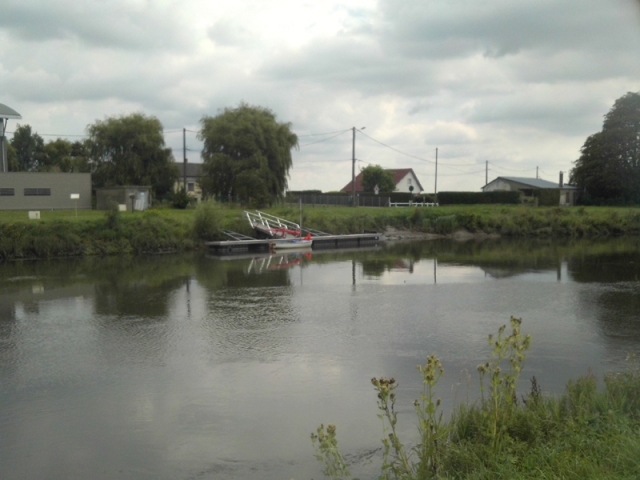 I went for a little walk and crossed over the bridge. Here is my moored boat from the other side. 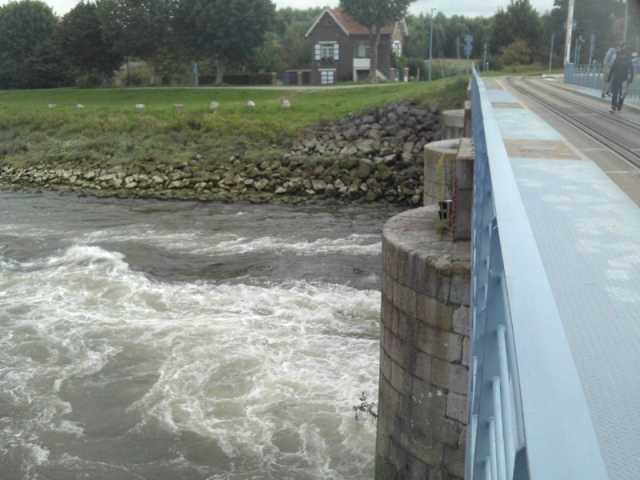 This is the canal flowing out into the sea port. Don’t get caught in that! 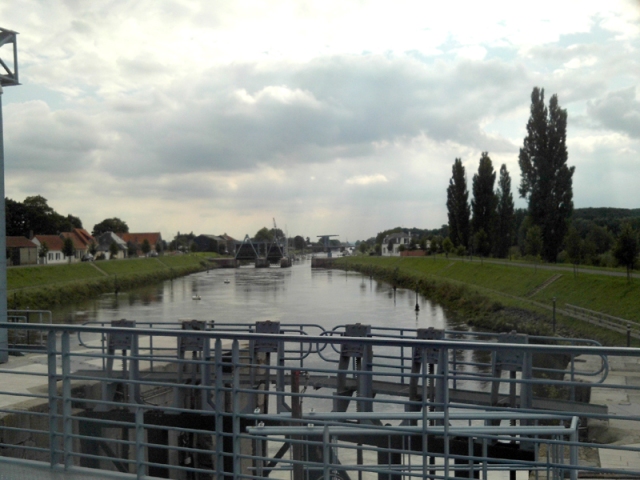 Here I look over the lock of Saint Valéry sur Somme, all sluice gates open. 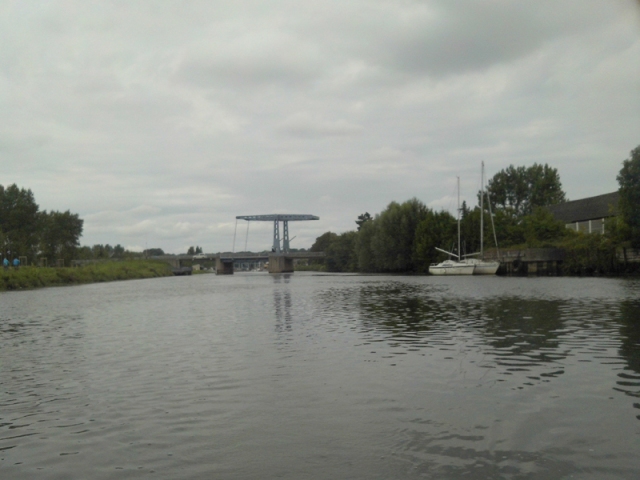 At last, the first bridge was behind me, and I hoisted the main. I sailed in a dead run, as always on inland waterways. My silent boat attracted attention from cyclists and walkers, and the occasional fisherman (I was very watchful for the lines and floats). 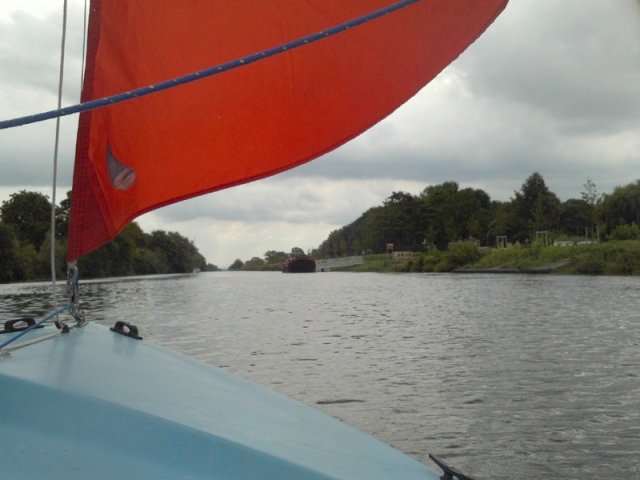 I continued my way past a big barge beautifully converted into a home. 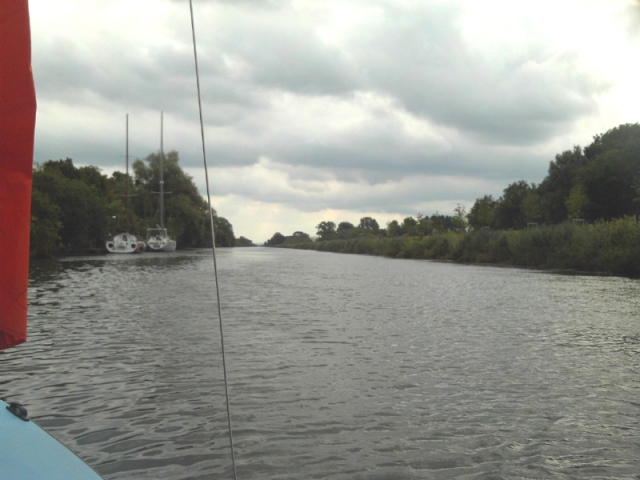 Here I sailed past two yachts that didn’t look to be in very good condition. Sad. 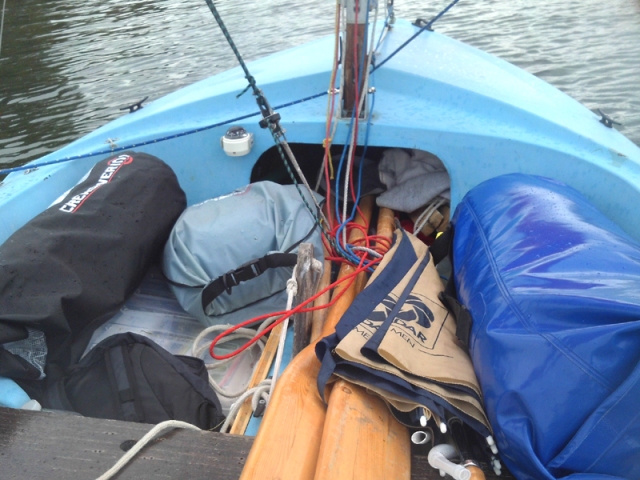 Here’s all my clobber: dry clothes in a bag, toilet gear and towel, cambuse (galley) box underneath, my bedding was in a big dry bag to the right of my umbrella (came in useful for a couple of short showers of rain). My trusty oars are in the middle, ready for use at any time. Sailors, sorry about the mess in my running rigging lines – I just couldn’t be bothered on a canal run. I am a lot more disciplined at sea where it really matters! 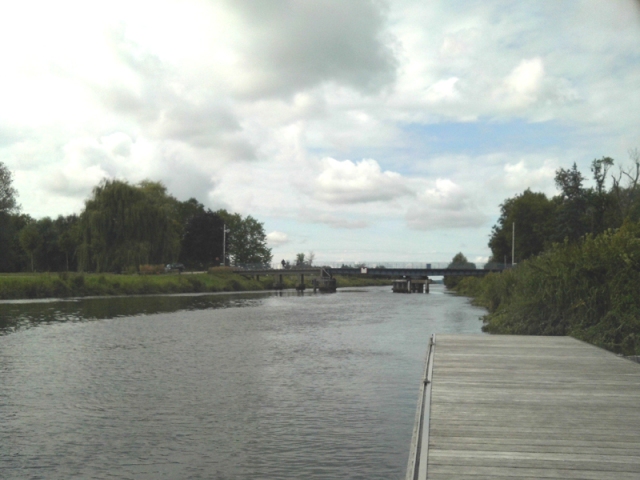 Here’s my lunch stop just past the second bridge. I had to lower the mast for this one and the following ones. You will see at the end of this posting how I did it. 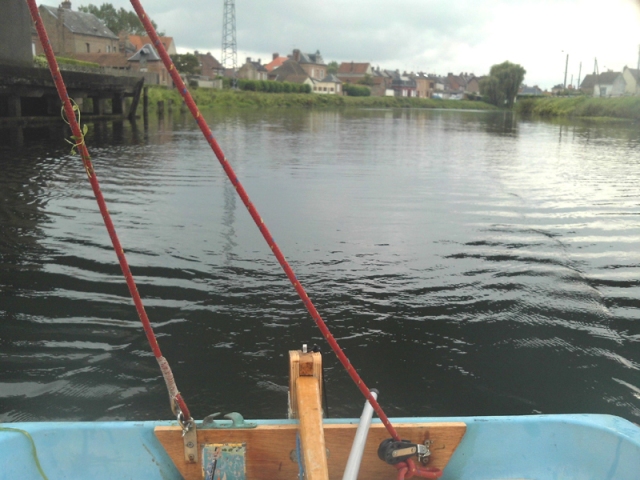 As I entered Abbeville the buildings and trees sheltered me from the wind and deprived me of my source of power. I had to row, and thus I was sitting on the thwart as I took this photo. 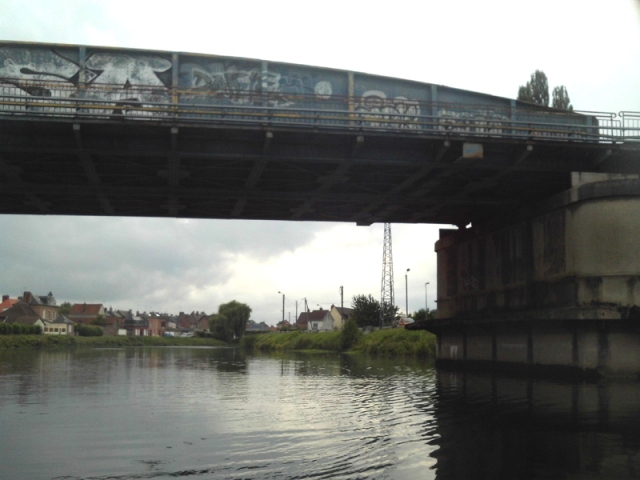 A real bit of brutalist French civil engineering from the 1930’s, graffiti from much later. 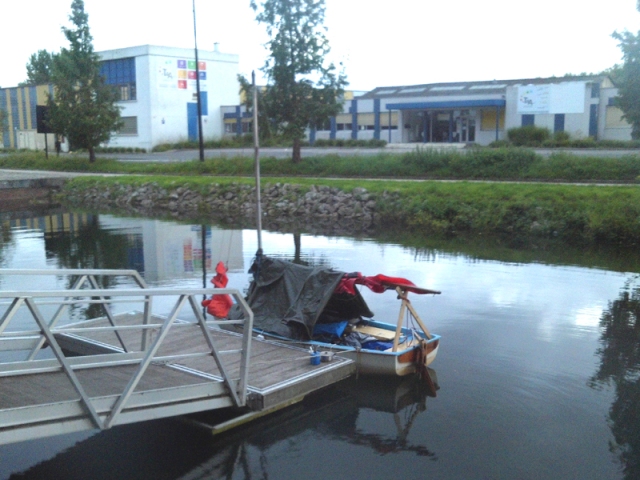 Here I moored at the waiting pontoon for the first lock through town. The bridges and locks are no longer operated after 6 pm and I was there more than an hour after that. The choice would be to wait until morning and continue, knowing that I would be rowing back. I decided to stop at Abbeville, camp for the night on board and then have the whole day if necessary to row back to Saint Valéry sur Somme. 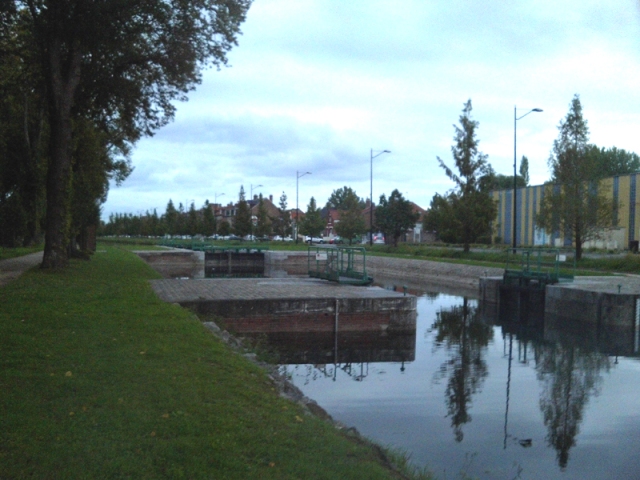 Here’s the lock of Abbeville. It was a quiet night apart from revving motorcycles and barking dogs. 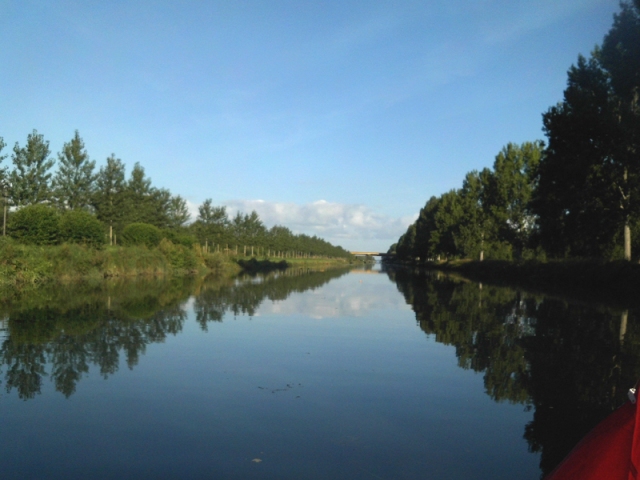 Sunday morning. Whatever wind I would have would be against me, so it was better to have none at all for rowing. It was literally like a mill pond. 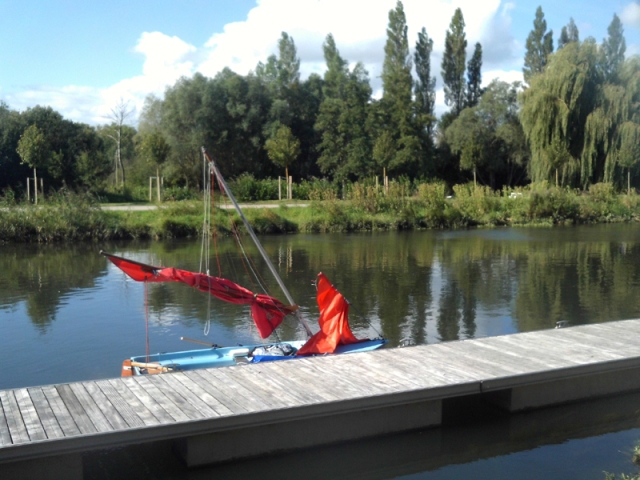 Finally for those wondering how I did the mast trick for the low bridges. The forestay is shackled to a pulley. A line is attached to a pulley on the bow plate, and runs through the pulley on the forestay shackle and then through the foredeck pulley, then back towards the mast through a clam cleat bolted to the foredeck and a traditional cleat for safety. The entire manoeuvre is made possible from being on board. My former system was only accessible from outside the boat (beached or moored).

The mast pivots in an aluminium tabernacle (not a place of God’s presence or prayer but a hinge fixed to the mast step of the boat to keep the foot of the mast in one place) which I made for the purpose. The mast can come down much further, and completely when necessary. I discovered a way to hold the yard and boom as high as possible (using the topping lifts) to keep them out of the way for sitting on the thwart and rowing.

I devised this system and adapted it from standard mast stepping systems found on small yachts, the difference being my exact need to lower the mast for going under a bridge allowing less than 3 metres height. A yacht going down a canal will simply demast and use its engine. My system allows me to sail between the bridges and not have to de-rig the boat – provided that the wind is favourable (there are two winds on a canal or a river, behind your head or right in your face).

I rowed about ten miles (taking five hours), sometimes against gusts of wind. I had a favourable current for a couple of hours when the lock keepers at Saint Valéry completed the flushing job they began on Saturday. That probably saved me a couple of hours.

My shoulders are still aching!

4 Responses to Up and Down the Canal