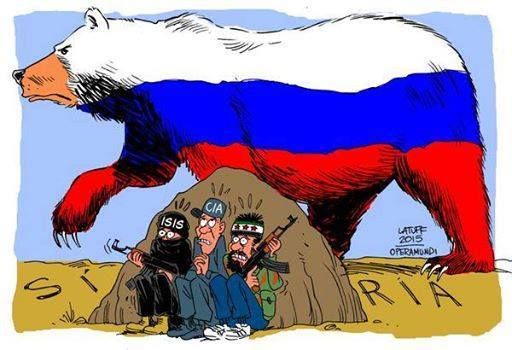 I jot this down with some trepidation having read the news about Russia doing more harm to ISIS / Daesh in one day than the Americans and British in a year. The latest whingeing and whining from Washington is that Putin is attacking “moderate” terrorists (supposedly the “good guys” trained by the CIA to fight against the Assad government) as well as Daesh.

Following these historical events, I am inclined to give more credence to the view that considers that the US have been fighting proxy wars in the Middle East, Afghanistan and elsewhere using terrorists and mercenaries trained and financed by the American taxpayer. If this is so, the mask is falling away and we face an entirely different world than what we have known since World War II. Europe will need to look to new leadership, and perhaps work to rediscover its Christian roots.

At any rate, Syria is something like much of Europe in 1945, and Daesh terrorists will soon be bits of pink flesh spattered against devastated walls, swinging from the gallows, or having French fits on scopolamine or sodium pentathol (or whatever they use these days) as they eagerly tell all they know about their mates. I hope and pray the refugees of Syria will be able to return home, rebuild the desolation of many generations – and obtain humanitarian help from as many of us who can give it.

In the meantime, the hype about CIA trained and financed “moderate terrorists” reminded me of this old story. Perhaps they go down to their underground bunkers to drink tea and have parish council meetings and cucumber sandwiches with the Vicar. The mind boggles. Here it is:

A group of Anglican extremists have attacked Cackwater shopping centre in Gutborough. There are no casualties, although several people are reported to be “quite confused”.

The attack took place at midday outside the local branch of TK Maxx. A bomb, made from cake mixture and “hundreds and thousands” was left in front of the store and exploded, leaving two men splattered and one man needing counselling. Shoppers ran for cover, fearing that the cake-bomb was the first of many, but were disappointed.

Shortly after the attack, a video appeared on the Anglican fundamentalist website extremistvicars.co.uk claiming that “all those who do not worship the Lord shall lead a rather average life” and that “if you do not follow the path of Jesus Christ, then I shall wag my finger at you”.

The alleged leader of the Anglican Fundamentalist group, Valerie Bin-Liner, said that the campaign was aimed at “all those who don’t attend church, i.e. everyone”. Police have been tracking Bin-Liner for the last two years, and have as yet been unsuccessful. Sightings have been frequent; latest reports say that she is hiding out in a box room in Cheltenham.

Anglican fundamentalism is growing in the UK. A group of women were arrested two months ago after putting excessive amounts of sugar in the tea of supposed “disbelievers”, while another woman was arrested after trying to ram her bicycle into the side of a nightclub.

An elderly man escaped the clutches of police officers after an attempt to hijack the number 51 bus to Gropple town centre. The driver, who has undergone counselling to recover from the harrowing experience, said “he approached me and said that he had a cake-bomb strapped to his waist and that I should divert the bus to Scrimpton. Naturally, I did as he asked – it was only the next village, and he appeared quite determined. The passengers were almost frightened – both of them. I kept my calm and drove the bus to Scrimpton, where he said ‘thank you’ in a menacing manner, and got off the bus. That’s when I called the police.”

Locals in Gutborough, however, are fearing another wave of Anglican attacks, and have been advised not to eat any cakes until the situation has eased.

This entry was posted in Uncategorized and tagged Humour, Islam, Politics, War and Peace, World War III. Bookmark the permalink.