My wife and I have returned from a weekend in Amiens, where there is one of the most glorious cathedrals in France. I had meant to go there by boat from the Somme coast by going up the canal, but it was not practical from Abbeville. See Up and Down the Canal. Here is a representation of High Mass in the Bishop’s presence in the early nineteenth century: 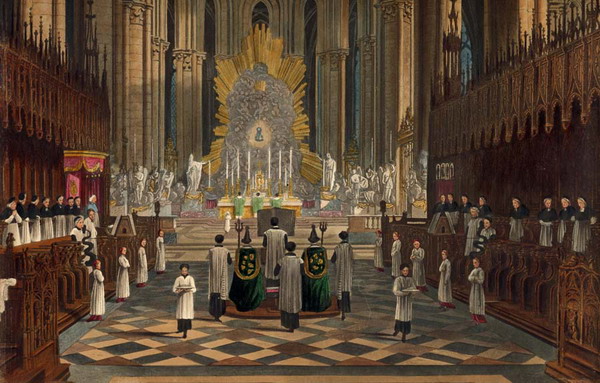 Photos of this cathedral can be found on the internet, but here are two I took, one of the altar – unchanged except with a Novus Ordo “chopping block” in front, and the hanging pyx. 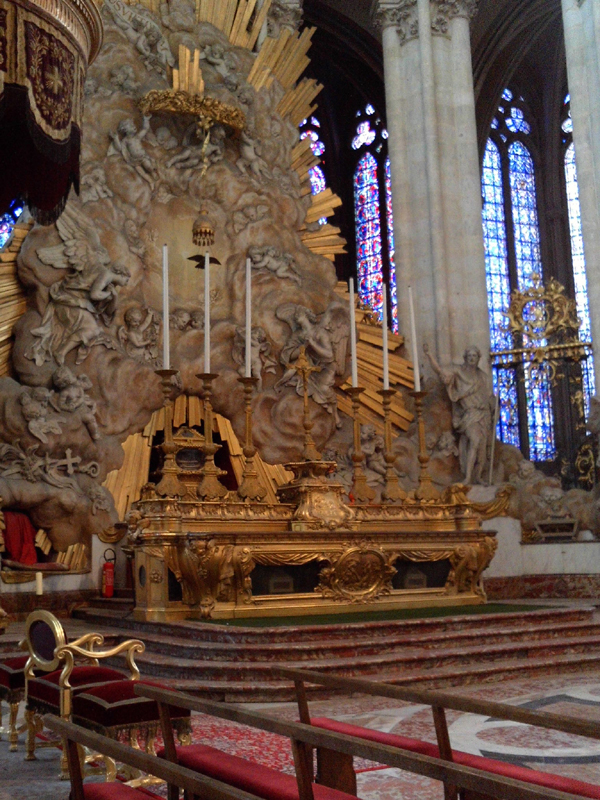 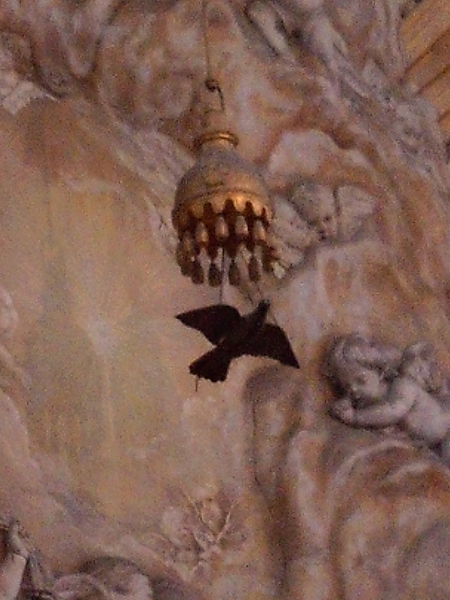 I am not as keen on this insane baroque as I might have been at one time, but it is fascinating. It is quite significant that the hanging pyx was retained, since in most cathedrals, the Blessed Sacrament is reserved in its own chapel.

We also visited the house of Jules Verne, my boyhood hero who aroused my fascination for France. The reflection of my wife as we left Amiens: the nineteenth century was a different era for France and England. England was very stable politically, but the Victorian moralising environment was quite stifling for art and culture. France was politically unstable during that era, but there was a great growth of culture and art, literature and invention.

I was “bitten by the bug”, as it were, in the 1960’s through seeing the 1954 Walt Disney version of 20,000 Leagues under the Sea. A few years ago, I put up Jules Verne and the Sea on this blog. The incredible thing is that Jules Verne did travel, but most of his work is the result of his Romantic imagination and the influence of Leonardo da Vinci and just about every visionary since then. He spent most of his time in a small study in his lovely house in Amiens.

Jules Verne died in 1905, and the house changed hands quite a few times, requisitioned by the Germans under the Occupation, bought by a large oil company, then acquired by the city authorities to make a Jules Verne museum. A lot of work went into restoring some of the rooms as best as possible as they would have been in the late nineteenth century. 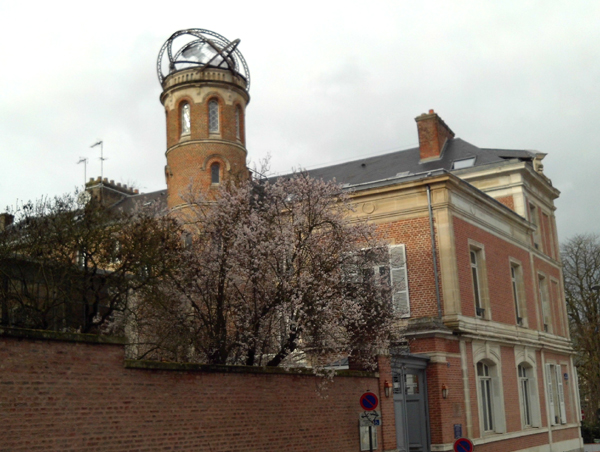 This is the main part of the house from the street with a gate into the yard. The tower is original, but the astronomical representation is modern. 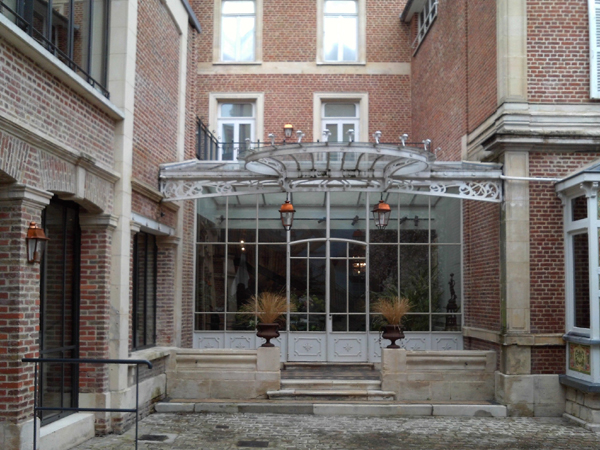 So French, like a posh hotel! The winter garden is rather splendid, full of plants and a large model submarine. 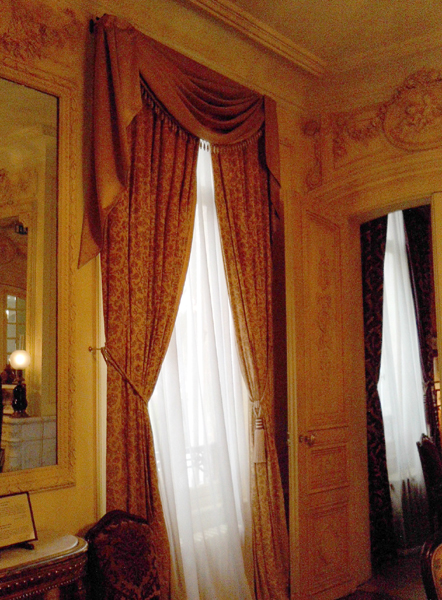 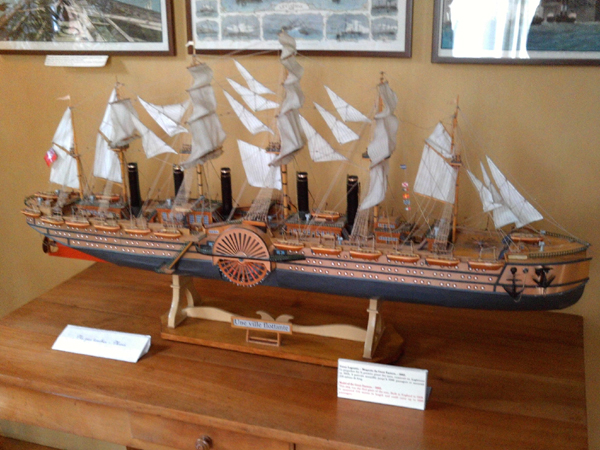 This is a model of the Great Eastern, the most insanely huge vessel that ever floated! Spread over six masts, the sail plan is amazing. 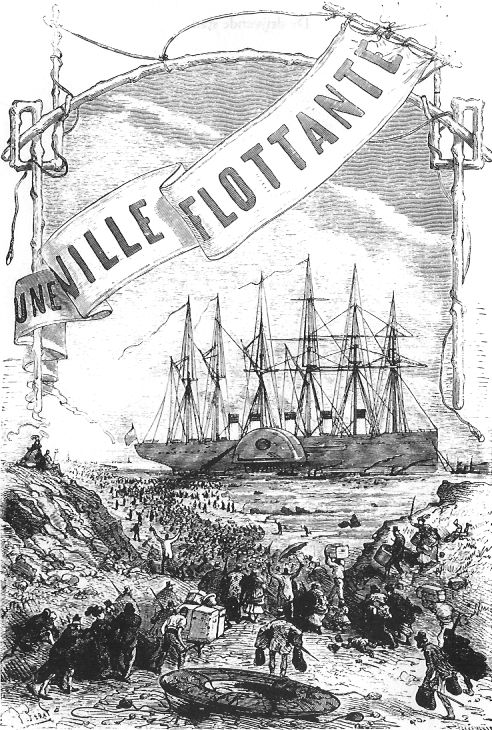 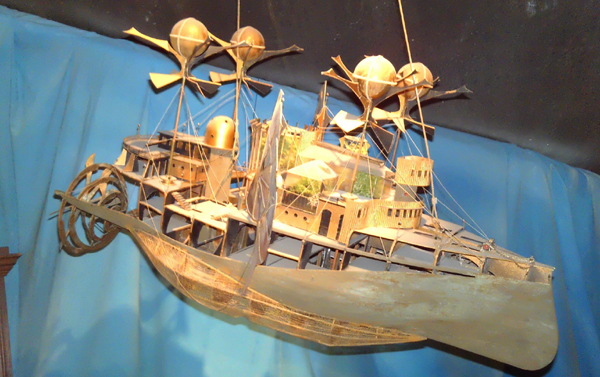 And now for some of the inventions, clearly in the spirit of Leonardo da Vinci. This appears to be a ship with a mechanism from the wind turbines to power a stern screw. I’m not an engineer, but I imagine that this kind of system would involve colossal losses of energy efficiency. 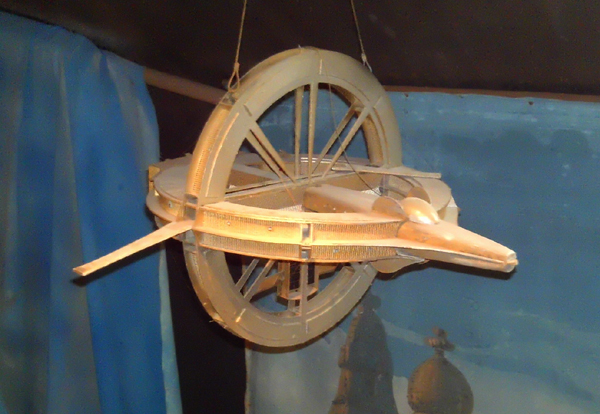 The museum gave no explanation of this one. Perhaps it might be a spacecraft, which seem phenomenal, since Verne had the idea of shooting a moon-bound craft out of a huge cannon. Naturally, no living organism would have survived the acceleration forces, and the rocket turned out to be the only way of conceiving space travel. This model truly is very odd. 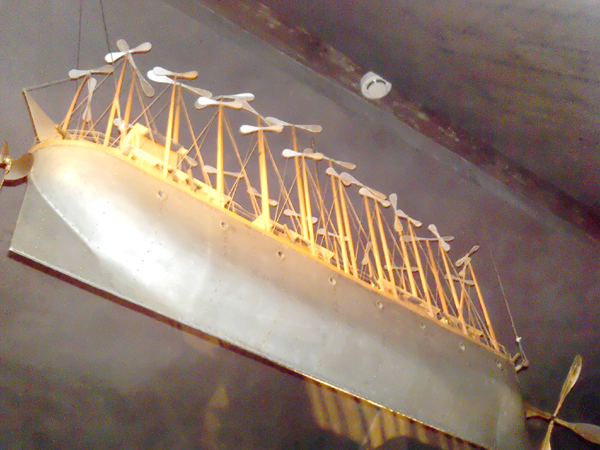 Here is another ship, similar in concept to the one above. I have no idea whether such a propulsion system has ever been built and tried. Though it is obviously a ship for sailing on the sea, it has a big air propeller in the bow. Perhaps this ship was intended to fly by being lifted by the very numerous rotors. 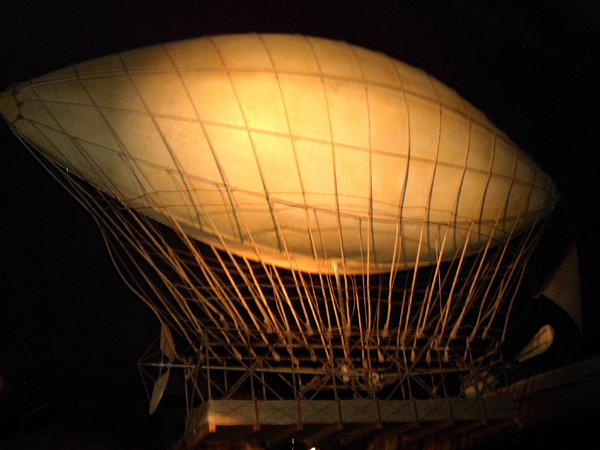 No mistake here. It is a nineteenth-century version of the Zeppelin, filled with hydrogen and propelled by an engine. 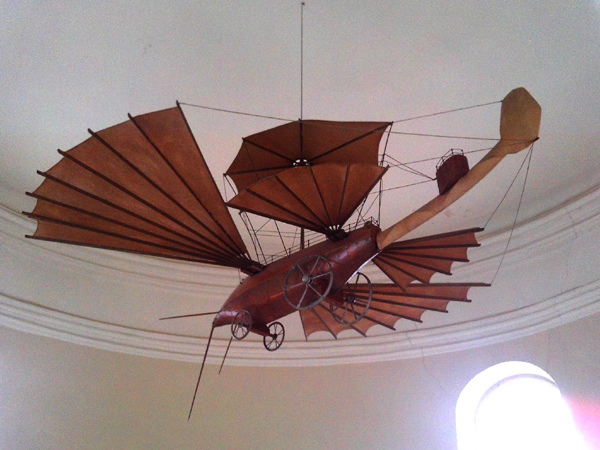 Finally, this is a rather beautiful aeroplane with flapping wings. Many such machines were tried in the very late years of the nineteenth century. None ever flew. As most of us know, the first aeroplane that flew was that of the Wright Brothers in 1903. Here is an amusing film of man’s early attempts to fly.

What an imagination! Verne was more of a visionary than an inventor or an engineer. Submarines existed before Captain Nemo’s Nautilus, but Verne’s dream was a development from the crude machines of the American Civil War. It was always a vision of the future, an upwards aspiration. It was an era of great optimism and hope in human progress, sometimes to an almost blasphemous extent – and lasted until 1914. The Somme, where Jules Verne lived, was also the place where humanity died in the trenches and when darkness descended over the world.

Will there ever again be a Renaissance? Perhaps, but long after the dark night and the “New Middle Ages”. I was happy to have a glimpse into the life of this amazing man of science and letters.

This entry was posted in Uncategorized and tagged Amiens, Jules Verne, Travel. Bookmark the permalink.