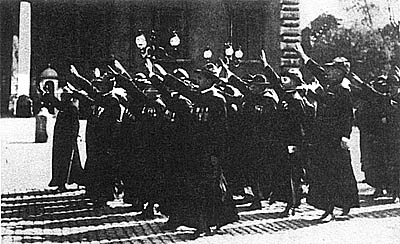 Monday in Holy Week, 1937 … by Fr Hunwicke was brought to my attention by an e-mail from Dr Tighe, with the title Fr. Hunwicke “Gets Political”. I don’t see him getting political so much as rather being a little uncritical about the view put about by Roman Catholic conservatives and traditionalists that we have a choice between the euphemism of “the social kingship of Christ”, in reality the Papacy and its chosen two-bit dictators with Latino moustache, Havana cigar, snazzy uniforms, hundreds of medals and sunglasses – or the Nazi hell as reigned from 1933 until its defeat and the reconstruction of Germany.

Pius XI was the Pope of Christ the King, and one can have certain sympathies for this imagery expressed by the feast of the Epiphany and events like the Transfiguration. I do think that Christ can be seen carrying an allegorical meaning of the King, the anointed one who would lead through love and example rather than worldly power and bullying. We English treasure our Queen, who has reigned for a lot longer than I have been alive. She is a constitutional Monarch – and I think that fact makes her rule over us that much more spiritual and human through her personality.

The encyclical of Pius XI merits being read – Mit Brennender Sorge. Like Fr Hunwicke, I wish my German was better than it is, so I give it in English here. There are two fundamental themes, the evil of an ideology based on race hatred and the so-called Ubermensch – and the question of whether we are to be ruled by Hitler or Christ. A wrongly understood notion of Christ as a king has given rise to the cult-like situation in the Society of St Pius X. By reductio ad absurdam, the real Christian kind of rule would involve a ruthless dictator like Franco or Pinochet, and with rebels and protesters being arrested by the secret police, imprisoned and executed without trial.

How do we recover a more allegorical notion of this kingship? What did Christ himself say?

Pilate therefore said unto him, Art thou a king then? Jesus answered, Thou sayest that I am a king. To this end was I born, and for this cause came I into the world, that I should bear witness unto the truth. Every one that is of the truth heareth my voice.

He did not affirm Pilate’s question, but nor did he deny it. He turned the meaning towards the truth of his word and teaching rather than a temporal authority in competition against that of the Roman occupation and Herod. He who preached the Beatitudes and taught that the lowly of this world would be the first in the kingdom of heaven would not behave like Franco or Pinochet. The Βασιλεία τοῦ Θεοῦ is a concept that is totally different from the modern idea of monarchy or empire. I won’t go into the exegesis here, because others say it better than I, and there are loads of articles on the internet and books that go into the Greek words and the Hebrew from which they were translated.

This will certainly be a part of our meditation on the passion of Christ and the Paschal Mystery. The notion of “Christian totalitarianism” is pernicious and dangerous, and constantly opposed to the notion of secularism or laïcité, whether American style or French style. In theory, American secularism respects all religions when there is no trouble to public order (an atrocity or a riot for example). French laïcisme tends to affirm freedom from religion, encouraging citizens to be atheists. The document on religion freedom of Vatican II was written by an American, in an attempt to colour the post-war situation in Europe with the Pax Americana. Now, in its turn, the Pax Americana is becoming a new expression of aggressive war and crimes against peace.

Times have moved on again. Hitler and Nazism are dead. The American ideology of hegemony in the world is wearing thin, and I admire President Putin for standing up to it in the name of peace and respect of the sovereignty of countries like Syria. I believe in the notion of religious freedom, including the freedom not to believe, but this ideology needs reform and adaptation to the present world. French Jacobinism and its overflows into the five Republics also is dead, and the message of men like Hollande and Sarkozy is hollow and meaningless.

I am afraid for the future in spite of any number of exhortations not to fear, but I cannot see Christianity as having any relevance in a globalist dystopia. If there is anything political to do, it is to dismantle empires and nations, and return to a human level. I don’t know how that can be done, but the mega-society cannot continue. Christianity is made for little communities where people know each other and who are fundamentally guided by good in spite of temptations to sin. We need to drop the slogans and come up with something original and real.

This entry was posted in Uncategorized and tagged Christ the King, Moral questions, Politics, Reflections. Bookmark the permalink.