I did it, about the greatest distance I have covered at once in my 12 foot dinghy. I have yet to enhance my few presentable photos through Photoshop, so will do so on a following post. The problem with photography at sea, using a crappy waterproof camera, is that what appears to be close is really quite far – and the photos lack the impression a sailor sees on approaching something of interest.

I sailed on a close reach northwards under the Oléron bridge and made towards the Ile d’Aix, Napoleon’s last view of France before his exile. It took me four hours to cover twelve nautical miles and beach on the island. That gave me an average speed of three knots, not bad for a heavily-laden cruising dinghy. My enjoyment of the long reach was offset by my long drift to starboard having to be corrected by tacking between the peninsular of Fouras and the Fort Anette, all surrounded by rocks and treacherous oyster farms. I quickly discovered that at anything other than high tide, I had to be accurate with my coastal navigation. I don’t have a GPS, and do it the old-fashioned way using a hand bearing compass, chart and Portland plotter. The area is quite well marked with cardinal buoys and twigs sticking up through the surface showing the positions of the oyster fields.

I landed on the Isle of Aix about an hour and a half before low tide, so I could visit the island leaving my boat dried out on the beach. The church is a former abbey where the remains of thirty seven priests barbarously murdered during the terror and beatified by Pope John Paul II are interred. The nave and the choir have disappeared, leaving only the transepts and the Romanesque crypt. There was a striking feeling of the sacred in this church. Being in July, there were quite a few tourists in the car-less village. The place is remarkably unspoilt, and the house where Napoleon spent his last days in France is impressive. It is now a museum and can be visited, as my wife and I did back in 2012. I spent about three hours on the island until the water was deep enough to float my boat.

I had the idea of sailing to the north-west to pass the Fort Boyard, but the tide was flooding and the wind was from the same direction – north-west. It would have been a very slow and laborious close-haul and I was concerned about getting to the south of the Isle of Oléran before nightfall. I crossed over to the Isle on a single port tack, well off the wind for speed and power through the chop. I was unconcerned about current and drift, seeing that the crossing was little more than a nautical mile. I did not call in at Boyardville, but continued down the coast, well away from the osyter fields. My centreboard did touch something very lightly, but I took the precaution of not lashing it down. I was ready to “spring” my rudder at any time. After about two hours at sea, I found the port entrance at Château d’Oléran, which was very narrow for a close-hauled entry. As I passed through, I was facing the wind, and had to row very laboriously until getting more deeply into the port. It was difficult to drop my sails without getting blown up against other moored boats. The wind decreased, and rowing became easier as I reached the inner port and found a place among the vieux gréements, as most of the pontoons are reserved for fishing boats. I set up my tent and sleeping boards for my “hard bastard’s” night. I had a simple meal at a restaurant serving English-style fish and chips – rather good and reasonably priced. No one asked me what I was doing in port, so it was don’t ask don’t tell. Permission to moor in the port would have been clumsy and bureaucratic in usual French fashion, so the old idea goes – In France, everything is forbidden but everyone does it all the same! All the same, I was away at about 8 am the following morning when the water was deep enough.

I sailed south on a broad reach towards Ronce les Bains, and found I had a spare hour with the flooding tide. Having reached the Seudre bridge at 10 am, I gave myself half an hour to see some of the amazing little fishing ports. I had to close-haul out of the river with the current in my favour but against the wind, which gave quite a stiff chop to bash through. The wind freshened and I had to heave-to and reef the mainsail.

My man overboard routine came in useful when catching my mooring buoy at the beach of Ronce les Bains, which yesterday was a lee shore. I caught the buoy in a constant wind of fifteen knots, gusting at eighteen to twenty knots. I managed to drop the mainsail with my left hand alone as I held the buoy with my right. I took a mooring line from the bottom of the cockpit and got it through my bow fairlead using my gaff. I breathed a sigh of relief as I cleated off the line with the final round turn and two half hitches.

I was about to blow up my rubber dinghy to get ashore as the port keeper, a smiling young man in his late twenties, kindly came with his motor barge to give a hand. I took most of my cruising stuff out of my boat and we got ashore just before the water was too shallow for him. All in all, I covered about thirty nautical miles at and average of three knots within two tides, including my night in port. I think this “hard bastard” should be able to cope if the Challenge Naviguer Léger goes ahead next year and my wife doesn’t mind my going to that as well as the Semaine du Golfe. We’ll see… 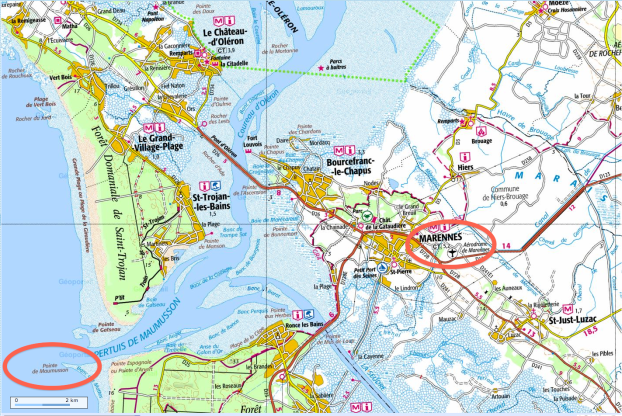 I am in Ronce les Bains this week with my wife and in-laws, and I have my trusty Sarum with me. I have a new plan in view for tomorrow morning.

I will be launching tomorrow morning under the bridge of the Point de Mus de Loup that crosses the Seudre, the river that flows into the Pertuis de Maumusson. I intend to launch shortly before high tide to allow for about two hours of current-free sailing northwards, because the currents in the Maumusson can be quite strong.

I intend to sail northwards past the Ile Madame and between the Fouras peninsular and the Ile d’Aix, a place with historic associations (the exile of Napoleon in 1815 after his defeat at Waterloo) and the charm of a little village with no cars or other motor vehicles.

I then intend to pass the Fort Boyard, another monument of France protecting her virginity against we British.

I will continue west to the Ile d’Oleran

and visit Boyardville. I’ll probably spend the night in or near Château d’Oleran on the lee side of the island, therefore in calm water or dried out.

I have to be back at Ronce les Bains on Tuesday late in the morning to catch the high tide (a window of only three hours) and avoid the forecast heavy wind in the afternoon which may gust at up to 22 knots. I could manage that with a reefed sail and little sea swell or chop, but I prefer to avoid trouble. I will then moor to a visitor’s buoy for the week and take my wife out for a few little daysails.

One purpose of this little adventure of 25 to 26 hours will be to test my sailing skills and endurance for an event next year called Challenge Naviguer Léger which involves a three-day sail over one hundred nautical miles. It is quite gruelling and involves complete autonomy, so I want to be sure that I am up to it. Therefore this little test. Let’s see if I can do about forty nautical miles within two high tides. I am confident.