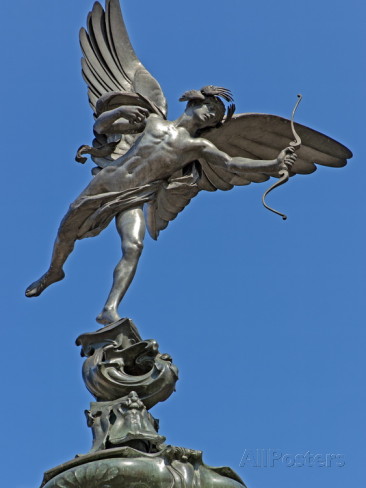 The statue of Eros in London

There is something of the Epicurian in this posting. As Oscar Wilde once said:

The only way to get rid of a temptation is to yield to it. Resist it, and your soul grows sick with longing for the things it has forbidden to itself, with desire for what its monstrous laws have made monstrous and unlawful.

It depends on the temptation. Usually in conventional language, temptation means what is pleasurable. A company that makes sweet chocolate cakes would advertise its product by calling it “Naughty but nice!“. Sweet cakes are fattening for someone who is trying to lose weight. At a higher level of poplar moralism is the question of sexuality, something that is made a market commodity and something supremely sordid through perversions and pornography. Wilde wrote provocatively to challenge the more absurd aspects of Victorian morality and public decency.

I have given much thought to the notion of simple sensuality as it is distinguished from sexuality. This is for the simple reason that many sensual experiences that bring pleasure have nothing to do with sexual intercourse which is typically between a man and a woman. There exists a whole range of paraphilias, a study of specialised psychology, where sexual pleasure is derived inappropriately from inanimate objects or parts of human bodies. Abstracts like domination or sadistic desires are sometimes expressed sexually. We become tired of commercialism and what is supposed to be “sexy” in both men and women. I do not wish to discuss this subject any further in this posting.

Many sensual experiences often arouse the human being without being connected with sexuality. From childhood, we become aware of our senses and what brings pleasure. For some, myself included, smells are important and contain many associations: a forest in spring and its earthiness, odours of home and childhood. My sense of smell has become extremely sensitive since I stopped smoking. I was surprised to detect a smell of cigars in my car; I must have driven past a car in which a person was smoking a cigar and a tiny amount of the smoke got into my van through the ventilation system. Feel is very important for me, whether through my fingers, other parts of the body or lips. This can determine how we dress as well as the question of appearance for other people and our own self-esteem. One lovely thing about having long hair is feeling it caressing one’s shoulders and back. Silk and satin bedsheets are very good for sleep and relaxation. Music and sounds in nature are also highly important. Taste is always less sensitive than smell, extremely so in a dog, and to a more moderate extent in humans. We are stimulated and brought awake by all the things we see each day, whether natural or works of human art and beauty.

Perhaps all this doesn’t seem very edifying coming from a priest! One problem in the Church is its tendency towards Stoicism and an anti-human asceticism: repression leading to worse moral and psychological disorders. The reduction of everything to sex is one of the greatest blunders of modern popular culture. For me, the earthy smell of the forest in spring will course through my entire body – but it is not sexual. It is an experience of another order.

Sensual experiences often lift us to the point of spiritual experience (to use a sober word), and this is how the liturgy can uplift the person who is sensually awake and in tune with the kind of culture that produced liturgy and art. The same is true in monastic spirituality in which life is lived according to principles of asceticism, austerity and discipline, from which the slightest experience is lived with an extreme acuity. A prisoner falls in love with the bird that settles on his window ledge outside the bars. Monastic Lent brings us to love and appreciate each leaf, the insects, the smell of the earth and everything around us as we walk through the Abbey grounds and the surrounding Vercors mountains (on my “day off”). This is sensuality at its highest. It is part of the Romantic awakening.

Perhaps many deviations of human desire might be solved by this vital distinction, so that the darkness may be illuminated by what is good and beautiful. Sexuality seems to be raw and brutish like animals mating to reproduce. Sensuality involves delicateness and tenderness, the feminine within all of us. Many men cannot cope with this aspect. As a child, I climbed trees outside, but loved to put on an old green satin dress to play with my sisters when I was indoors.

From a theological angle, I remember some fascinating lectures in moral theology by Fr Pinckaers at Fribourg University. The subject of eros (ἔρως) and agape (ἀγάπη) when considering love or caritas is vital in our understanding of ourselves, our ethics and Scriptural morality. Anders Nygren was a Swedish Lutheran in the 1930’s who wrote a book on this subject in two parts, both published in the 1930’s.

Much of our Christian theology of love for the sake of the other and for oneself is a major theme in St Paul’s Epistles. The Greek word ἀγάπη is usually translated as charity, a word that has become banalised to mean philanthropy or refraining from thinking, saying or doing evil against another person. The word love is as perverted in its modern meaning as romance (as distinct from Romanticism). It is brought down to the lowest common denominator of smuttiness or cheap sexuality. The Greek meanings have not changed – one advantage of a dead language, like Latin.

Love is motivated for each of us by pleasure and sensuality, which can then bring us to that pure disinterested love that is described in that great quotation from St Paul (I Corinthians 13) which we hear time and time again at weddings. Eros is based on our own needs and desires, and erotic love can be as much for God as for earthly things. Agape is unconditional and self-sacrificial, and it enters our life as a purification of our desires and sensual stimulation. Eros is not sinful, but provides a powerful motivation to seek transfiguration: it has not to be repressed but transcended, sublimated as Jung would have said. We are brought in the order of grace to love the other for the other’s own sake and not for our own.

Many problems in Christianity are caused by conflict between ἔρως and ἀγάπη. Christianity is a superposition of orthodox Jewish monotheism and the paganism of the gentiles it had to adopt to get the message through. There has always been this compromise, as will be seen when we compare nineteenth-century Anglo-Catholicism with Calvinist puritanism or Wahabee Islam. Nygren was quite opposed to this medieval compromise as being unfaithful to the true nature of Christian self-sacrifice and disinterested love. This was perhaps central to Luther’s Reformation. The highest kind of love is what we give our enemies, in the words of Christ. Love goes from our sensuality and desire to giving our lives, happiness and freedom for the other. This is the most difficult and the call to heroism. Is every Christian called to be a hero? Perhaps, but it will be a small Church, a “Benedict Option” – and churches and liturgies will be taken away from our countryside and the common folk. Elite or popular?

Did Christianity really destroy eros? Let us take a look at the pre- Christian world. The Greeks—not unlike other cultures—considered eros principally as a kind of intoxication, the overpowering of reason by a “divine madness” which tears man away from his finite existence and enables him, in the very process of being overwhelmed by divine power, to experience supreme happiness. All other powers in heaven and on earth thus appear secondary: “Omnia vincit amor” says Virgil in the Bucolics—love conquers all—and he adds: “et nos cedamus amori”—let us, too, yield to love. In the religions, this attitude found expression in fertility cults, part of which was the “sacred” prostitution which flourished in many temples. Eros was thus celebrated as divine power, as fellowship with the Divine.

The Old Testament firmly opposed this form of religion, which represents a powerful temptation against monotheistic faith, combating it as a perversion of religiosity. But it in no way rejected eros as such; rather, it declared war on a warped and destructive form of it, because this counterfeit divinization of eros actually strips it of its dignity and dehumanizes it. Indeed, the prostitutes in the temple, who had to bestow this divine intoxication, were not treated as human beings and persons, but simply used as a means of arousing “divine madness”: far from being goddesses, they were human persons being exploited. An intoxicated and undisciplined eros, then, is not an ascent in “ecstasy” towards the Divine, but a fall, a degradation of man. Evidently, eros needs to be disciplined and purified if it is to provide not just fleeting pleasure, but a certain foretaste of the pinnacle of our existence, of that beatitude for which our whole being yearns.

This is the kind of thought that formed me in my student days, both from the mouths of kindly Dominicans and the books I read. We have not to be inhibited from taking pleasure and enjoying what our senses bring us. We have to be purified – perhaps the meaning of Wilde’s suffering in prison, so that pureness will come out of the ecstasy – ex-stasis – being outside ourselves.

Let us fight against banality, cheapness, commercialisation, and discover our true selves by which we can learn to love God, humanity and the whole of created nature.

PS. The so-called statue of Eros, properly called the Shafesbury Memorial Fountain in London’s Piccadilly Circus (ironically a district that was once notorious for prostitution), is actually the Angel of Christian Charity, something most of us do not know.

This entry was posted in Uncategorized and tagged Moral questions, Reflections, Romanticism, Spirituality. Bookmark the permalink.