Posted on Thursday, 4 May, 2017 by Fr Anthony Chadwick 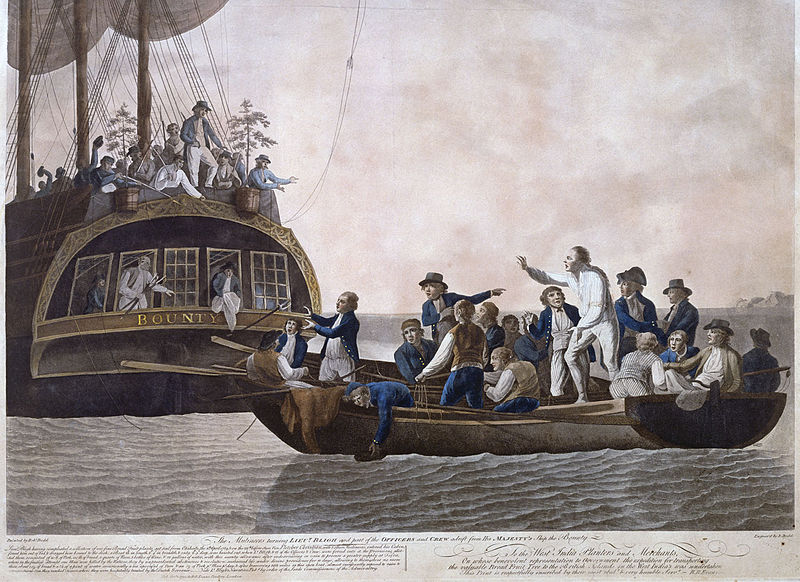 I mentioned the issue of punishment in the Royal Navy at the end of the eighteenth century in connection with Captain Bligh and the mutiny of the Bounty. I have of course, like many others, been influenced by the films made on this subject in the 1930’s and in 1962. Bligh was portrayed as a cynical sadist without any empathy for the men under his command. The 1984 film Bounty, is more moderate on this subject, but shows Bligh as foul-mouthed and rude to his officers, even in front of the crew.

This morning, I received an e-mail from a correspondent:

I take your point about the religiosity of fear and punishment and it will be undoubtedly be so that the Royal Navy saw it fit – eventually, after some considerable time – to discontinue flogging of its sailors, but I think your phrasing “the court-martial of Captain Bligh” implies he was found guilty. We know in fact that he was honorably acquitted, went on to become a vice-admiral of the blue after a stint as Governor of NSW during which he time he sought to break the corrupt NSW “Rum” Corps and the privateers like John McArthur.   His record, and the indisputable achievement of bringing all of his Bounty co-expellees across 3 and a half thousand miles to safety in Timor show he was a man of skill, courage, strength and integrity, of a character far-removed from the popular misrepresentations, (including of his alleged brutality).

The Wikipedia articles William Bligh and Mutiny on the Bounty are of interest in our general historical education in the matter. All commanding officers were harsh in those days and most sailors were pressed into service from taverns and prisons. These days, we prefer to think that a commanding officer who inspires respect and conveys a fatherly role would obtain better performance and team work in the demanding task of sailing a ship. The Navy recognised that fact, not only because of Lieutenant Bligh who was acquitted by the court-martial, but also because times were changing in the way of the Enlightenment.

The story of Bligh’s voyage to Timor, 3,618 nautical miles from where he and his loyal officers and men were set adrift in the Bounty’s shallop by the mutineers is a legend in the annals of seamanship. Regarding discipline, the evidence of the ship’s log shows that Bligh scolded when other captains used the cat o’ nine tails, had a man flogged when others would have him hanged from the yardarm. He was interested in science, and cared about the crew’s welfare, particularly seeing that they got food of good quality, hygiene and physical exercise.

I end with his final quote from the Wikipedia article:

The modern historian John Beaglehole has described the major flaw in this otherwise enlightened naval officer: “[Bligh made] dogmatic judgements which he felt himself entitled to make; he saw fools about him too easily … thin-skinned vanity was his curse through life … [Bligh] never learnt that you do not make friends of men by insulting them.”

I sometime say things lightly, or go along with the conventional view, which is not good. I sinned from weakness, but wanted to illustrate the point that human beings do better by being guided than punished. Punishment is sometimes necessary, as with training animals like dogs. The balance between reward and punishment, and especially respect for those you have under your command, is delicate and requires qualities I would certainly not have in such a situation. When I sail, I sail alone and have only myself to command, and the consequences of my own errors of navigation to assume!