John Beeler (who regularly writes on Facebook but rarely in his blog) wrote an interesting entry on Facebook about “no-frills Catholicism” showing an Ordinariate Mass in a rather kitschy modern church.

This is apparently somewhere in the USA. One comment says: Astounding- good lighting and merely facing eastward makes mass in a kitschy 60s building come off beautifully. This reminds me somewhat of the Other Modern articles in the New Liturgical Movement. Scroll down the page beyond the eighteenth century chant books, and you will find articles on church art and architecture from the twentieth century. I have often been intrigued by 1930’s and 1950’s churches some find ugly, but which express the reconstruction from the first and second world wars. I discovered some very interesting church buildings in Paris built under the Chantiers du Cardinal scheme.

One aspect common to these churches, as for those built later – when the plan was more or less traditional – was their extreme sobriety and plainness. In a certain way, they revive the ideals of the Cistercian movement in the twelfth century as they reacted from what they perceived as corruptions in Benedictine monasteries. Fontenay Abbey in France is a typical example from that era. 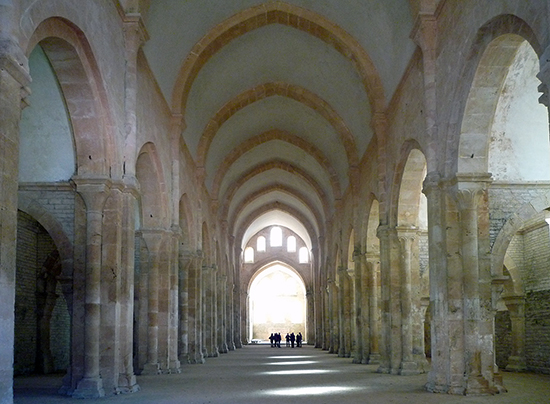 The Cistercians were quite “iconoclast” in their reduction in the number of statues and images, but the keynote of their architecture was harmony, symmetry and nobility. Some of the “other” modern churches tried to recapture this spirit.

Returning to John Beeler’s eastward-facing Mass in a modern church, the effect is quite other-worldly, the congregation deeply in prayer and the priest quietly saying Mass with a single server. One intriguing feature is the use of lights or candles in glass vases. They are just what I use when travelling and living in minimalist conditions. I wrote an article on the tuck box chapel some time ago. It is fiddly to use, and the tent doesn’t allow me to stand up fully.

Tea lights in glass vases are ideal for when there is wind (you have to be careful that the Host doesn’t get blown away!).It is quite amazing how much a modern tent blocks out most of the wind. The missal stand, though small, is unwieldy. I have ideas of making a new one on a round turned wood stand. I have the tiny travelling chalice and paten which my parents gave me on the day of my ordination.

Saying Mass outdoors is another experience. When I went on a sailing course at the Glénans in 2009, a large granite rock on the beach was my altar.

It all folded away into my rucksack, since I left my van at Concarneau and was isolated for a week on those lovely islands. What a way to begin the day!

There are many rational and historical arguments for the “eastward position” as Anglican ritualists in the nineteenth century once called it. One of the finest authors on this subject was Monsignor Klaus Gamber who found favour with Cardinal Ratzinger. These few notes and photos show the question from a more aesthetic and “emotional” point of view, even a pastoral point of view.

Finally, I should add that minimalism should not be a norm or an ideological refusal of beauty. Mass is normally celebrated in a consecrated church, and is only celebrated elsewhere in cases of necessity, for example being excluded from celebrating in historical churches because of not belonging to the establishment, being victims of persecution and brought to worship in clandestinity. It is better to worship in less than ideal conditions than not at all.

In terms of taste of church furnishing, I gradually “grew out” of my baroque formation at the seminary of Gricigliano and elsewhere, and gravitated to simpler styles influenced by the Pre-Raphaelite and Arts and Crafts movements. Things did go a little over the top in the mid eighteenth century and with the grandiosity of the Victorian era. The twentieth century brought an attempt to simplify and seek a more “medieval style” – see the Parson’s Handbook by Percy Dearmer as an example of that ideal. Such inspirations continued for a long time, and I cite Guildford Cathedral and St Alban’s Holborn as examples of fine architecture from the 1960’s.

I tend to simplicity myself. I have not worn lace surplices or albs for many years, preferring plain white linen or cotton with simple vestments. I don’t impose my preferences on others, nor do I think they are wrong if they prefer more baroque or “Victorian” styles. Either way are options that indicate a frame of mind and preference in their living the Church’s liturgy. More is perceived by personal experience than arguing – something very exasperating in the English-speaking Catholic and Anglican world.

This entry was posted in Uncategorized and tagged Liturgy, Pastoral matters. Bookmark the permalink.