I have just made an improved missal stand for my travelling chapel, because before it was resting on two triangular feet which got in the way of things like the corporal on a very restricted space. I adopted the column and round foot solution. 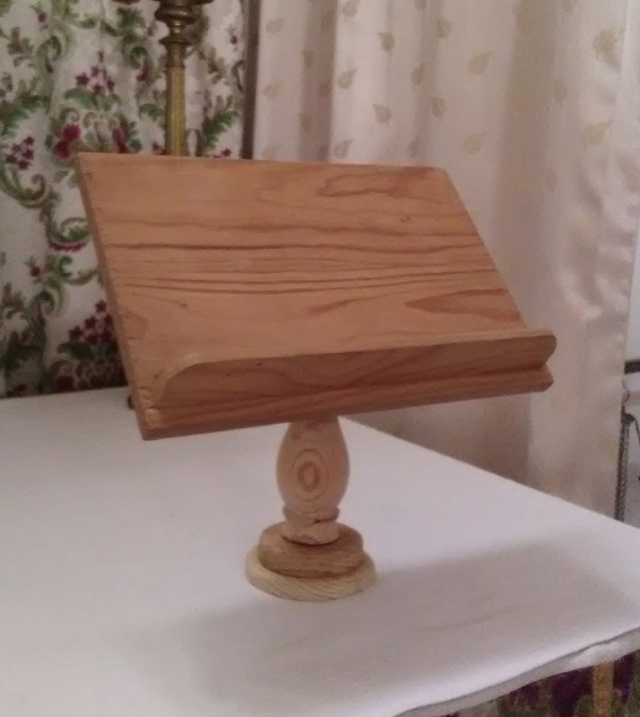 It is quite stable and has a tipping-over moment of at least 15-20° with a book that isn’t too heavy. The ideal format is a book with something like A5 pages. It can also take the laity version of the Anglican Missal and a small format Roman missal. My Latin Dickinson missal will go on it, though it is a little on the heavy side.

The design is based on the metal pillar stand which I use in my chapel.

I bought it cheaply from a church that also sold me its organ. It is much more stable than my new wooden stand and will take heavier books, but not the big Roman and English missals that were published in the early twentieth century.

An alternative form, which I made some years ago in oak, is foldable and also designed for smaller format books. I presently use it in my sacristy for holding the Ordo. 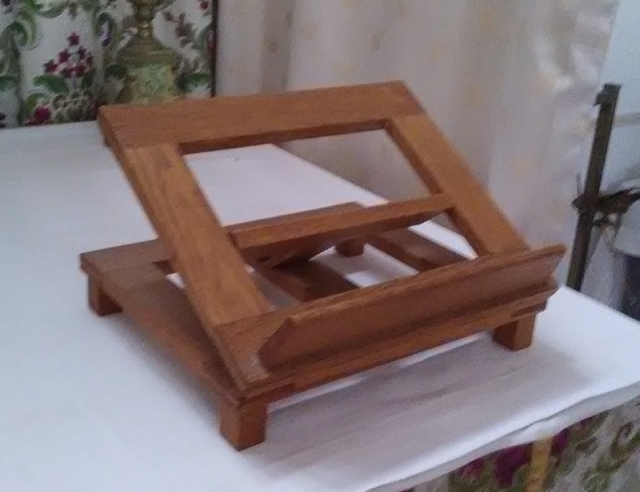 It has four square feet and will go on most altars without getting in the way. Of course, it is the most stable design, and has three angle positions from almost flat to the angle you see here. I have come across priests who prefer an almost flat position for the missal. In Percy Dearmer’s recommendations and probably in the medieval Church, a cushion was used to position the missal for easy reading and to give it some dignity as a sacred object.

I am not much of a purist and favour the wooden missal stand, preferably with a fairly steep angle. The round pillar allows the missal to be distanced further from the area of the altar covered by the corporal. When the missal is “flitted” (moved from one side to the other) it can be taken by the part holding the book, or with one hand by the pillar, which is what I do.

Some missal stands are very elaborate, like in this catalogue. I don’t really like them and they are very pricey. Many designs are possible, but in the end, I prefer the column type.

This entry was posted in Uncategorized and tagged Liturgy. Bookmark the permalink.