Where it all happens

I have been doing a massive job of reorganising my scriptorium, or in less pretentious terms, my office. It’s still not finished, but it is operational for my translating jobs and other uses I make of my computer including this blog. I have selected the most consulted of my books to be near me, and all the others are left in a library in another room of the house – still to be reorganised and adapted for Sophie to be able to use it as an office.

It was quite a mammoth task, as both she and I tend to be hoarders – and the useless stuff is going. I won’t sleep and work in a furniture store. The house is becoming something of a Kubric’s Cube! What comes out of one place has to go into another. Sophie is convinced of the need to do much more sorting-out, and get rid of, give away or sell what we don’t need. It’s a start.

In order to do the main heaving and moving, I have not attended to the details of archiving loose papers, but came across a few photos that dropped out of an envelope. One of them was this one of my priestly ordination in 1998. 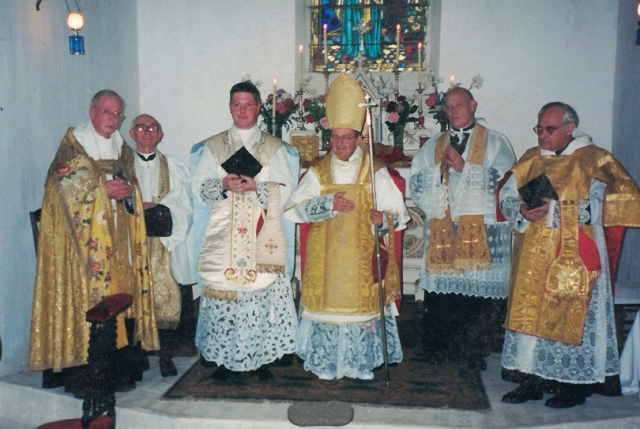 Of the six of us in the photo, only I and one other are still alive! It is a sobering thought. I am glad to have found my way back to Anglicanism and the possibility to minister somewhat more legitimately as a priest in a diocese under a Bishop. I thank God for that grace, because we are not priests for ourselves but for the Church. This coming June, it will be my twentieth anniversary… In March (19th) it will be the Silver Anniversary of my diaconate (at Gricigliano by Cardinal Pietro Palazzini).

This entry was posted in Uncategorized and tagged Personal life. Bookmark the permalink.

1 Response to Where it all happens