This is the day when Christians are mortified by thinking about the treachery of Judas. I have books and articles about old Gnostic ideas according to which Judas did this deed according to the wishes of Christ. I read these ideas again and again, and every time, it seems nonsense to me. There is a vast difference between Jesus accepting death because this is the Father’s will and committing suicide by some grandiose scheme involving getting himself crucified. Every time, I return to the Biblical and Christian narrative of what happened. Judas was a thief and a hypocrite, and sold Jesus to the Temple clergy for thirty pieces of silver, and committed suicide when his remorse became too much for him. It would have been better for him had he never been born.

I am familiar with the book of Elaine Pagels and Karen L. King, Reading Judas, the Gospel of Judas and the Shaping of Christianity. I haven’t read this book in sufficient detail to offer real criticism, but what I can already say is that the bits I have read leave me unsatisfied (if that is the word to use here). A so-called Gospel of Judas is contained in the edition I have of the Nag Hammadi Scriptures. It’s mind-bending stuff. Could we exonerate Judas without it being at the price of the traditional narrative of Christ’s Passion? The trouble is that if we nibble off a bit here and a bit there, we might be left with precious little other than a pile of ashes. I am glad the Romantics of Jena (not the men themselves who have been dead for two hundred years – but their writings) have helped me to relativise foundational “truths” that can mislead us more than intuition and poetry!

The Apostles were all messed up by the events. They fell asleep at Gethsemane, doubtlessly because they didn’t have the foggiest idea of what was going on, why Jesus was going off on his own to pray in an extreme state of anguish. Peter denies Jesus three times because he is at the very place where Jesus was on trial before the High Priest Caiaphas and then before Pilate. He remembers the prophecy of Jesus about the crowing of the cock, and goes out and “wept bitterly”. Thomas disbelieves the Resurrection until he is confronted with physical evidence. Nothing comes near to the treachery of Judas.

The way the Canonical Gospels portray this man is measured. He was a thief:

Why was not this ointment sold for three hundred pence, and given to the poor? This he said, not that he cared for the poor; but because he was a thief, and had the bag, and bare what was put therein. John xii, 5-6

Judas was both a thief and a hypocrite. What he did against Jesus was for money. He was overcome by remorse after the act and committed suicide. However, we have this verse from the Acts of the Apostles:

Now this man purchased a field with the reward of iniquity; and falling headlong, he burst asunder in the midst, and all his bowels gushed out.

This would seem to suggest that he did not commit suicide but died accidentally in a rather gruesome way. I am not really bothered about the apparent contradiction, or simply the event as misunderstood by one of the two narrators. In one version, Judas wanted to give the money back to have some hope of redeeming himself. In the other, he kept the money and bought the land with it. It is perplexing. Would that be enough to give serious consideration to a completely different narrative? 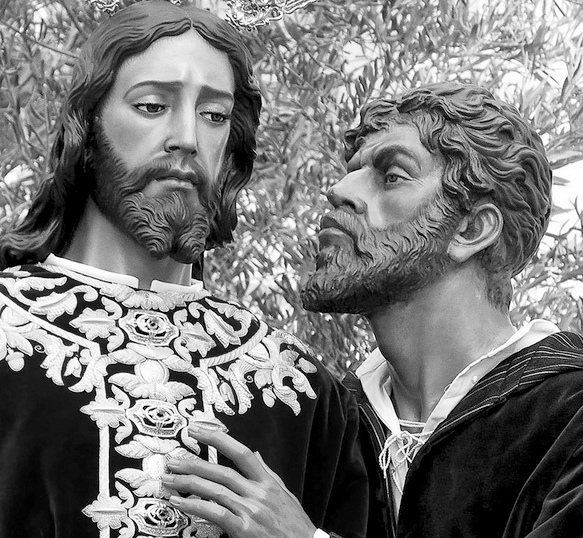 This representation of the kiss of Judas is quite chilling, and a remarkable tribute to the artist in reproducing facial expressions. The face of Judas is bestial and diabolical, whilst Jesus looks with sadness and a hint of surprise as he is betrayed with a kiss. The aquiline nose is associated with a low brow, pouting lips, a receding chin under the pointed beard and half-closed eyes.

Hypocrisy and theft are serious sins, but which come nowhere near to betraying one’s friend for money. Treachery is a form of murder, by getting the evil act done by someone else. It happens all the time in countries under some form of dictatorship like England under Henry VIII or Elizabeth I, Germany under Hitler or France under Robespierre. How far do we have to be pushed to betray a loved one to the enemy? This will be a good examination of conscience for us all. I hope and pray that I would prefer to die than betray another person. Judas didn’t need to be under such pressure. He just wanted money.

These are things not to forget as we get our churches and chapels ready for the Triduum. How someone can celebrate Easter without these intense moments of Christ’s Passion and the human weakness and evil around him is beyond me.