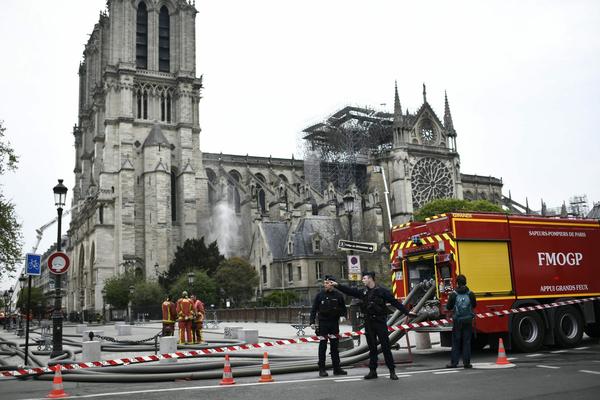 It was about the time when the fire alarm was given when I saw something on Facebook. News from mainstream sources was still rare, and only the roof over the crossing was ablaze. The fire brigade was there very quickly. Unfortunately, their equipment was not designed for the height of a cathedral and water dropped from an aircraft would have caused the building to collapse. Most of the roof was lost. Those men are true heroes, and they risked their lives. They finally extinguished the fire in spite of all the difficulties.

There are two big holes in the vault and experts have been called upon to evaluate the stability of the cathedral without its roof. The purpose of flying buttresses is to compensate for the downward and outward pressure exerted by the roof. Modern technology will find the solution, especially as such calculations of compensating forces were current in the thirteenth century!

This is a calamity for France, Europe and the entire world. Notre Dame represents more than a Christian place of worship, but is also a national cultural symbol. President Macron has pledged his support and generous financial aids. In France, all churches older than 1905 belong to the municipality and cathedrals belong to the State.

An idea came into my mind this morning: a blessing in disguise. Let me explain. The cathedral was in very poor condition and restoration work had begun. The wooden spire over the crossing was surrounded by scaffolding and precious statues has been removed for restoration only a few days before. How did the fire start? An inquiry has begun, and the French authorities will without doubt find out and tell the media.

Over the past few months, churches in France have been victims of vandalism and arson, sometimes committed by fanatical individuals for religious or ideological motives. It would not seem to be the case here, since the public do not have access to the part of the cathedral where the fire started.

The fire united people, religious and non-religious, in grief for this monument of national culture. The media was brought to reflect on Christianity at the roots of French and European culture. People were singing and praying in the street with their priests, who had the bells of their churches ring. What an amazing witness for their faith without any triumphalism.

The cathedral will take decades to restore to its splendour, but the message has been put over this very day. Europe and France are Christian and invite us all to turn to Christ during this Holy Week, Easter and forever afterwards.

Update: The main organ is safe and has not been damaged by either water or heat. We are still waiting to know that all the masonry is stable and not about to collapse. They have experts looking at it all.

I have just found this daguerreotype of the cathedral before the restoration work of Viollet le Duc began in the 1840’s.

There were no gargoyles. Viollet-le-Duc added them after having read too much Victor Hugo! In this photo, there is no flèche (spire). We wait with bated breath to know what will be decided for the restoration work.