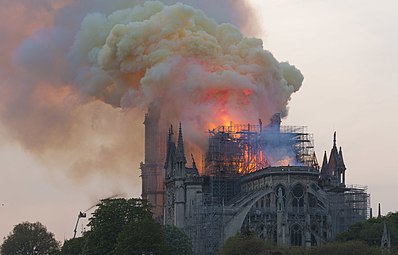 I was tempted to give this post the title A New Russian Revolution? – but it is not a question of Russia, either under Soviet Communism or the Putin regime. It is about my own country. The vandalism of a church is relatively but a small symptom, but an indicator of what seems to be behind an epidemic of arson and wanton destruction. The article has a number of links underneath it to such more serious incidents.

One commenter seemed to understand things rather well according to his world view that is not mine:

I think it’s much more likely to be people who consider organized religion, (or perhaps specifically Catholicism?) to be a scourge. I personally feel sad to see art desecrated, but I can somewhat sympathize with the impulse to repudiate what it stands for. As lovely as this structure is, it’s maintenance testifies to social value that no longer exists, if it ever did.

The desecration of this lovely old building is akin to the desire to pull down statues, I think. As stupid and pointless as that is, and as disrespectful of art, it speaks to a powerful impulse that lives in many people now, and manifests as a need to actively deny any form of membership that is based in the history of a group. The churches and the statues announce, “This is who we are, collectively.” The desecrators reply, “Collectivity is a pack of lies.”

“Tear it down!” is the unspoken, subconscious cry manifesting everywhere: Acceptance of the Covid lies tears down the economy, degradation of music and art tears down human feeling, materialism tears down human thought, political corruption tears down collective values. It’s as if the world we have known is a set of bowling pins and something has set the ball on a trajectory to strike them all down. Once the tear-down process is complete, will the psychopaths really be in charge of the rebuilding, as is their desire? I don’t think so – I think their plans are pipe dreams.

But how will people make sense of their existence? What a time to be alive!

In itself, it seems to be the cry of a nihilist. Perhaps this person would welcome a planet-killer asteroid or an all-out nuclear war. At the same time, the person recognises the existence of human feeling, thought, collective values, life itself. What is in the mind of a young man emptying fire extinguishers and breaking windows in a medieval church? Is it fun? Is it an expression of anger? Mental illness?

Vandalism is an old problem and is found in all periods of history. With some research, we would probably find that legal and police authorities have profiled those who have been charged and convicted of vandalism. It is commonly associated with gang culture in inner city deprived neighbourhoods. Buildings and vehicles are often victims of riots as presently done by the more extreme elements of the Gilets Jaunes and those who oppose the Passe Sanitaire here in France.

Vandalism to churches, if it is not for self-entertainment, would seem to be motivated by hatred of religion, or hatred of Christianity by fanatical forms of Islam. Legal authorities in different countries vary on the ways they deal with vandalism. In Singapore, one might get three years imprisonment and a caning. Most western countries will not send a vandal to prison for more than six months, which is complicated in the case of most offenders who are still minors.

In history, one particular form of vandalism is iconoclasm, theologically motivated by the condemnation of images from the early Church to the Reformation and, more recently, the liturgical reforms in the Roman Catholic Church from the 1970’s.

Vandalism was a characteristic of the 1871 Paris Commune. In that year, the Tuileries Palace was burned down, and Nietzsche himself saw in this act a fight against culture. What would justify something so senseless? Why turn on beauty and works of scientific achievement? Why the wish to destroy man’s knowledge of history and what we can learn?

When the Nazis were defeated, the Allies systematically destroyed the symbols of the totalitarian regime.

The destruction of Nazi symbolism was something that was necessary in 1945 as part of the exorcism of something so evil and dreaded, which had taken so much human life over its twelve years of tyranny. This time, it is a reaction against evil that caused this wave of vandalism, often by spectacular means such as explosives. At the same time, is there something in common between someone who attacks a church and Allied soldiers who destroyed Nazi symbols? The question seems blasphemous, but perhaps the vandals of today believe they are doing some good by ridding the world of symbols of what they perceive to be repressive religion.

Coming back to the comment I quoted, there is a feeling that human society and its institutions have become so corrupted that complete destruction is needed before the construction of something completely new. The UK has suffered the double-whammy of Brexit and Covid. We no longer have any confidence in politicians. Art without form and music without harmony and beauty are so destructive. Materialism and consumerism take away our taste for thought and reading. In the Church, secularisation and liturgical deconstructionism have destroyed spirituality and mysticism. Why not do a “hard reboot”, press the computer’s “off” button and cease all activity before restarting ex nihilo? It is a tempting thought. Perhaps press the “off” button and throw the computer off the cliff into the sea – suicide!

We are faced with the mystery of evil. Few theologians and mystics have got anywhere near this terrifying reality other than Jacob Böhme. His thought was very much at the root of German Idealism and Russian philosophy. Böhme saw a struggle of opposing principles, of light and darkness. The struggle of God between his love, anger and wrath are visible throughout the Old Testament, and coincided with the Reformation themes in Luther and Calvin. The opposition is within the divine essence as it is within us all who are created in his image. God himself is tormented. The church vandal is tormented. However, German Idealism at the root of Romanticism gives the key to discerning one thing through another. Light is discerned against darkness, good against evil, the spirit against matter. Creation and Redemption are continuing, and this is the most fundamental meaning of the Church and the Sacraments of Christ.

This may to some extent explain the torment of nihilism, the immaturity of the person who has not yet discerned goodness, truth and beauty against his own nothingness. If we stop at the torment of our spiritual vacuum, we can only seek to destroy, self-harm and ultimately commit suicide. This is something we will understand in the ultimate perversion of the German spirit as it was twisted by Hitler’s ideology. They committed suicide rather than face an alternative and a more human world view.

Ultimately, though we may feel like taking vandals and flogging them and laying their backbone bare as Captain Bligh would have put it, we need to bring the power of the Idea and the Imagination back to the world. Only light can fill our darkness.

This entry was posted in Uncategorized and tagged Mystery of Evil, Religious fanaticism. Bookmark the permalink.

3 Responses to A Nihilist Revolution?