For Those in Peril on the Sea

I am planning another passage in Novalis along the northern coast of Brittany at the end of July and a week or so of August. I hope to sail from the Rance, past Saint-Suliac and westwards to the Ile de Bréhat.

The tides will be moderate, so we can only hope for fair weather and a calm sea. I take great care as an amateur sailor to avoid risky situations, though they can happen like on mountains and other wild places where man experiences his fragility and the limit of his influence. There are lots of rocks, and my trusty GPS chart plotter will give me accurate position checks to avoid them.

Of course the title of this posting refers to the famous hymn Eternal Father, strong to save. The Church has always shown its concern for sailors in the Navy, Merchant Navy and fishing vessels. They take greater risks than we amateur sailors in our little sailing vessels and a less than perfect knowledge of navigation and other essential skills. There is not only this hymn, but also the touching ex-votos in the form of model ships and paintings, usually offered by sailors who survived life-threatening situations at sea and express their gratitude. There are many votive chapels in Normandy and Brittany. Here is the example of Notre-Dame de la Grâce in Honfleur. There are not only model ships, but paintings depicting storms at sea, shipwrecks and miraculous rescues.

Another I found very poignant is the Lady Altar in Saint Suliac, a quiet port on the Rance inland from Saint-Malo.

I know these places well because I go there in my boat. In the photo here, look at the carving under the statue. Shipwrecked sailors are reaching out for help at the point of drowning. The wrecked boat and tattered sails are on the right. I find it very moving. 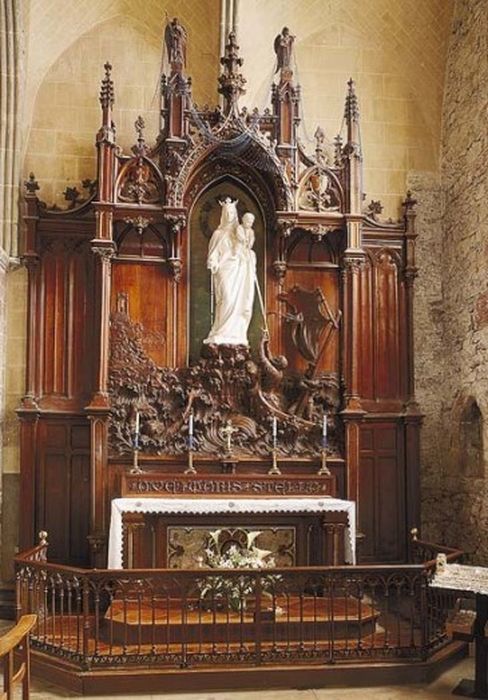 Saint-Suliac was immortalised by the French TV series Entre Terre et Mer, about the Terre Neuvas that went to Newfoundland to catch cod and store them in salt. The story is extremely poignant. The fish were caught on hooks and lines from small boats, and many of these dory boats were lost at sea. Here are the six episodes set in the 1920’s.

We see the human drama about these lewd men who found employment in this way to support their wives and children living on the north Brittany coast. They had no one to count on other than God. It was almost a survival of life in the Middle Ages, the absolute dependence of human persons on the feudal lord and the elements, their simple piety. The Captain of La Charmeuse is portrayed as a just and kind man, concerned for his men as a commander who knows that motivation and self-esteem, not flogging, makes a man he can rely on.

One again, I will sleep in my cramped cabin, which is much more comfortable than sleeping in a dinghy on hard boards under a tent. I will be able to spend nights in ports and with mains electricity to recharge my 140-watt battery, or tied to a buoy in a little cove in calm water, and use my rubber dinghy to get ashore.

4 Responses to For Those in Peril on the Sea