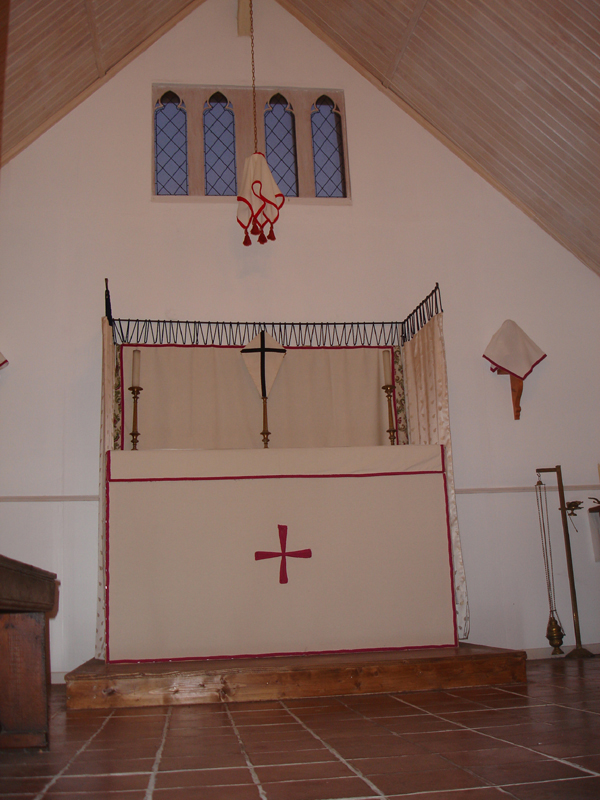 In many churches, the statues and crosses are veiled in violet as from Passion Sunday, or the fifth Sunday of Lent. My chapel goes into Lenten Array just before Ash Wednesday and the images are veiled in off-white trimmed with black and red. The Lenten Season is austere, and this is reflected in Lenten Array, because it is a time of fasting and preparation. Thus, here nothing visibly changes between the first four and a half weeks of Lent and Passiontide extending between now and the Paschal Vigil. The liturgy instructs us to cease saying the Gloria Patri at the Office of the Mass (Introit).

The Gospel of today is striking, because we are brought to what the Passion of Christ is all about – “Verily, verily, I say unto you, Before Abraham was, I am”. The Son of God is consubstantial with the Father, God of God, light of Light, very God of very God – as we say in our Creed. To those who did not believe or understand Christ’s testimony of his divinity, such words would seem like blasphemy.

I think about these texts the liturgy gives us to meditate and a clear picture emerges. Jesus is either a madman and a rebel, or truly the Son of God. The figure of Christ is too logic-defying to be an invention. It truly took faith for the Apostles and disciples to follow him against the entire established Jewish religion. We should not forget that those who persecuted Jesus were not willingly evil, but men who were convinced they were punishing a sinner in the name of the honour of the true God.

We go into Passiontide and we will be face to face with this Mystery of Christ who defies all to enter the Holy of Holies, priest and victim, and Saviour.

This entry was posted in Uncategorized and tagged Church trappings, Events of the year, Liturgy, Spirituality. Bookmark the permalink.