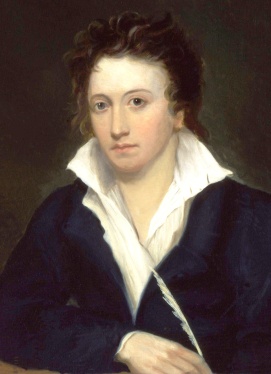 It could not have happened at any other time. It is almost as if Shelley had returned to us from the depths of the Mediterranean Sea and the wreckage of his boat. He was only eighteen years old when he wrote a poem that has remained unknown to us for the last two centuries. It took me a while to find the text, and finally I did, in a news article about the printed booklet containing this poem being given to the Bodleian Library in Oxford.

In 1811, Romantics like Shelley, Wordsworth and others raged about oligarchy, the unending war waged by Napoleon and the kind of poverty in England known to William Blake and Charles Dickens alike.

There remained only one copy of this poem, since Shelley was sent down from Oxford for atheism, in private ownership. Shelley used the pseudonym “a gentleman of the University of Oxford”, and this was attributed to Shelley only many years after his death.

When we read the poem, we may sigh with the old saying Plus ça change plus c’est la même chose. From Napoleon to the dictators of the twentieth century to the oligarchs of Saudi Arabia and the western world that finance and train pure evil! Where is the progress?

On that fateful Friday night of the 13th November, I sat in bed watching the film about Pope John Paul II from his days during World War II as a young student until he was elected Pope. The film showed his sufferings under the Nazis, and then almost immediately in 1945 onwards under the Communists. I could see the pure evil that forced a young Jewish girl to play the violin as they loaded people into the train for Auschwitz. The violin sang like a lark. A moment later, she was cut down by machine gun fire and the violin was ground to splinters under an SS boot.

After the end of the film, I looked at the news one last time for the night – and I knew what had happened in Paris – more of the same. As Karol Wojtyla never ceased to say, we cannot overcome by hatred, only by love. And for that, we have to have a new understanding of death, such that if our lives made no sense, perhaps our deaths will. And now Shelley’s voice rises from the depths of the sea…

This entry was posted in Uncategorized and tagged Islam, Life and death, Mystery of Evil, Romanticism, War and Peace. Bookmark the permalink.