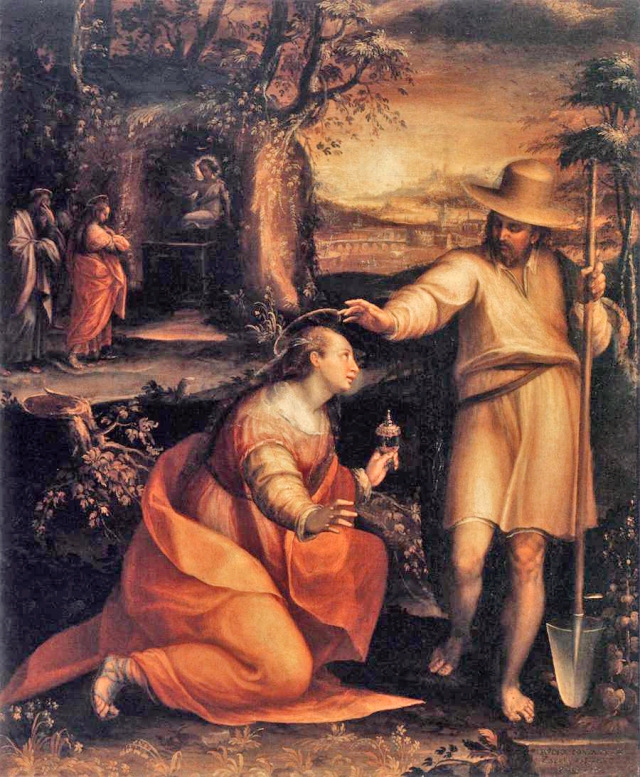 This title may seem provocative or even blasphemous, but reading the Gospel this morning (Quasimodo Wednesday in the Use of Sarum) troubled me profoundly. The passage in question (Mark 16) contains:

Now when Jesus was risen early the first day of the week, he appeared first to Mary Magdalene, out of whom he had cast seven devils. And she went and told them that had been with him, as they mourned and wept. And they, when they had heard that he was alive, and had been seen of her, believed not. After that he appeared in another form unto two of them, as they walked, and went into the country. And they went and told it unto the residue: neither believed they them.

People like David Icke often go on about humans who are in reality reptiles and “shape-shift” between their “natural” state and the human appearance. That association came into my mind as I was about to begin the Offertory. I paused, remained at the altar with “Lord, I believe, help thou my unbelief” like St Thomas whose being faced with the evidence was related last Sunday. I dismissed the “reptile” idea and concentrated on the idea of mystery, and what a resurrected body might be. I can’t dismiss what I don’t understand, but I have to keep an open mind. Many others must have faced the same problem of common sense logic and exegesis.

My studies in theology never prepared me for this. The Gnostics had their ideas, as had the Docetists so contested and refuted by St John. There were so many differences in the early Church about the incarnation and resurrection of Christ. The Ecumenical Councils would bring clarity about the consensus of the Fathers and a right interpretation of Scripture. Our New Testament classes went into general principles and what was known of the history of the texts, but we did not often go into great detail. That is the job of a student researching his own work. That is what university is all about. They give the keys – you go to the library and do the work!

There are any number of apologetics sites attempting to answer the question of why people like St Mary Magdalene failed to recognise Jesus after the Resurrection. On the road to Emmaus, Cleopas and the other disciple didn’t recognise him either. He could be recognised when he did the “right” things like breaking bread or in the case of St Thomas by showing the crucifixion wounds.

We find the notion of eyes being bound and opened. This happened to St Paul as he fell off his horse and the scales fell away when he was brought to the place of his baptism. People had such poor eyesight that they could not recognise Jesus whom they had seen preach and do miracles. Perhaps… Alternatively, Jesus could change appearance or “shape-shift”. Why would he do that?

In Luke 24 he simply disappeared. How did Jesus vanish from the sight of his disciples?, On the Gospel for the 3rd Sunday of Easter is very interesting and from a Catholic point of view rather than that of the slick American evangelicals. The article refers to the difficulties I faced today and on others days since Easter.

On reading this article, another thing comes into mind which I have already discussed on this blog: quantum mechanics and the non-existence of matter. What is at stake in the Resurrection narrative was not whether Jesus’ resurrected body was material, any more than anything in the holographic universe. We begin to approach the Gnostic notion of resurrection, not being simply the undoing of physical death, a dead person returning to his former state as what we know as a living person. The resurrected body passes through closed doors, changes appearance, appears and disappears, but yet relates to objects that we consider as material like fish, bread, wine and everything related by the New Testament. In theology, we talk of a glorified or spiritualised body which is no longer subject to the laws governing the bodies that we know in our experience.

This brings about a revolution in our thinking. What is spirit and what is matter? They are both the same thing. The basic unit, according to quantum physicists is not the atom, but the quantum particle of probability. I will leave the reader to try to understand a subject about which I myself know very little and find confusing. We live in a universe that looks “real” enough to us but which is like a hologram. Normally, we only experience our own “frequency”, but exceptionally we see other existence “through a glass darkly”. Perhaps Jesus was in another universe and could appear in our life sporadically and in different “forms”. It sounds fantastic, but I find the idea plausible.

The article to which I linked above brings up some quotes, which I would interpret as saying that Christ could not be perceived through the ordinary senses. One had to be spiritually disposed: able to experience something other than the ordinary existence we experience from day to day. Christ would have appeared in different forms according to the spiritual dispositions of the observer. We might today define these differences in terms of altered states of consciousness like the example of St Bernadette of Lourdes seeing a figure that identified itself as the Blessed Virgin Mary and hearing messages in comprehensible language – among many other examples of mystic experiences.

St Thomas Aquinas obviously had no idea of quantum physics, but we have to admit that he was talking of no ordinary human body! If we deny matter in the way it has been understood by Greek philosophy, medieval theology and Newtonian physics, then everything is spirit or consciousness, particles of probability given form by the Word or λόγος. The problem is no longer one of knowing whether Christ’s resurrected body is physical and material or not.

The question of moving from one universe to another is a subject of speculation, science fiction and real science. I have mentioned the case of a schizophrenic. A psychiatrist would make a diagnosis and prescribe a drug to close down the symptoms, thus restoring “normality”. The voices or “psychotic” visions could be real but from another “frequency” if we use the analogy of radio waves or visible light. The idea of the afterlife is not being bound by our bodies to our present world, but our consciousness or spirit being released to experience the other multiverses or whatever would be appropriate to call them. One big question would be whether we become disincarnate at death, or whether we carry the “higher” (astral) body with us as we left the “lower” one to corrupt in the earth, fire or whatever. However, in the case of Christ, no body of any kind was left in the tomb or anywhere else. That body was resurrected with any other kind of body and changed.

What about Lazarus? He was resurrected but died a second time later and left his remains somewhere on earth.

There is something else to be considered: the apparitions of Mary and the other saints to which I have alluded, but not only. There is the phenomenon of the materialised ectoplasm. In certain conditions, the consciousness of a deceased person, through the offices of a medium, can appear in visible form and be heard by the sitters in the room via a “trumpet”. Sometimes, the apparition can influence objects, for example by moving them. Some of these séances can be faked by fraudulent means, but others have been strictly controlled so as to avoid such “natural” explanations. I am as grateful to read about such research as I am about the progress of science beyond materialism.

Is the notion of “glorified body” an échappatoire? With these notions, I don’t think so once we escape from Newtonian physics and materialism. With a search on Google for “quantum glorified body”, we find any number of speculations and ideas we can all find of great interest.

This morning, it was my materialist instinct that made me doubt and have a sad time saying Mass, but I was provoked into asking the question and seeking some answers. We all need some kind of support and help from time to time.

This entry was posted in Uncategorized and tagged Faith and Reason, Quantum physics, Reflections, Science, Spirituality. Bookmark the permalink.