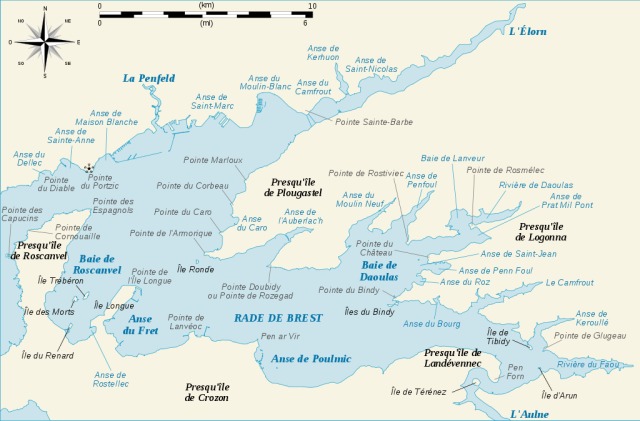 I have written very little on my sailing this year. I have been out on the English Channel a few times, the last couple of times in quite “sporty” conditions with unstable gusty wind from a weather shore or a fresh westerly with a hearty chop. This kind of thing is necessary to hone seamanship and sailing skills – and banish complacency.

The time has almost arrived for my Swallows and Amazons moment, when I continue to make my childhood dreams a reality. I intend to sail on the sheltered waters of the Rade de Brest next month (13th to 17th June) and participate in a gathering of small sail & oar boats, the Route du Sable (18th and 19th June) – almost a whole week.

Here is a little foretaste of my treat from the famous French documentary weekly Thalassa, dedicated to all things of the sea. The documentary is in French, narrated by the inimitable Georges Pernoud. The first part is the natural beauty of this little sea, so different from the Golfe du Morbihan. The second part deals with the city of Brest, with its Naval School and its incredible dry dock facilities for repairing very big ships. Here it is:

I’m getting ready for it now, checking the boat’s condition and my equipment for camping on board. I have improved many things from last year on the Golfe du Morbihan. I have sleeping boards instead of trying to squeeze into the cramped space between my centreboard case and watertight hull compartments. I have two self-inflating mattresses for a little more comfort. I will use two dry bags instead of one big one for clothes and other things that have to be kept dry. The same plastic boxes will do for the galley and the “captain’s cabin”. My safety and navigation boxes will go into the lazarette – easy access for if I get into trouble.

Electrics and electronics. Some of my things (VHF and camera) are battery powered, and I have lots of spare batteries in waterproof boxes. I have an mp3 player and speaker which can be recharged from a 5-volt USB connection, as can my mobile phone. Recharging will be using two solar units, one with an accumulator and the other with a bigger sunlight surface. The chargers have to be kept dry, so I will only be able to use them whilst not under way. I may have to sail at night, depending on tides, so need to have running lights to be both safe and legal. Oh, for some moonlight! The idea appeals to me – but it would probably be by rowing as there is often no wind during the night in the summer. I now have a convex mirror so that I can see where I am going when rowing!

The Rade is a big place. According to my plans, I will only have the time to visit the north coast (the whole thing is about 12 miles across), spend the Wednesday night tied up at Brest marina (possibility of food shopping and a shower) and return to the River Aulne on the Friday to get to Rosnoën on the flood tide.

My plan is to leave Rosnoën on the Aulne on the ebb tide and get well out of the strong currents before the tide turns. Another hour or so would see me to Daoulas Bay where there is a nice mooring port and I can use my rubber dinghy to get ashore. My next objective will be to sail up the long river to the east of Brest on the flood tide and out again on the ebb. If everything goes to plan, I’ll go to the marina of the Château in Brest, pay my €16 for a berth and visit the town, do some shopping and get a hot shower on Thursday morning. To sail back eastwards, I’ll need to hug the shore as I’ll be against the tide for a while, and then go back to my little tie-up in Daoulas Bay, spend the night. On Friday morning, I’ll meet up with three other boats bound for the Route du Sable, and we will have lunch at Landévennec (where there is an old monastery) and take the flood tide to Rosnoën.

On Friday night, I’ll have the chance to get to my van, fire up my laptop computer on the car battery and store my photos and videos on my hard disk, and have both cameras empty for the Route du Sable that begins the following day.

My courtship with Brittany continues!