I am just about set for the organ removal from Newington Green Unitarian church to re-install the instrument in the parish church of Vermenton in the Yonne region of France. I have been making use of the skills I acquired from a tiny fragment of an apprenticeship with Harrison & Harrison of Durham and a three-year course in harpsichord making at the London College of Furniture from 1978 until 1981. I am not a professional organ builder, but I concentrate on doing what I can do well, namely the experience I had with a tuner working for Harrison’s who taught me about the nuts and bolts of overhauling, repairing and tuning organs. My first and most ambitious “job” was a 1913 Arthur Harrison organ from Holy Trinity Fareham which I installed in the old abbey church of San Martino al Cimino near Viterbo in 1995 after it had been in storage at my old seminary since 1991. 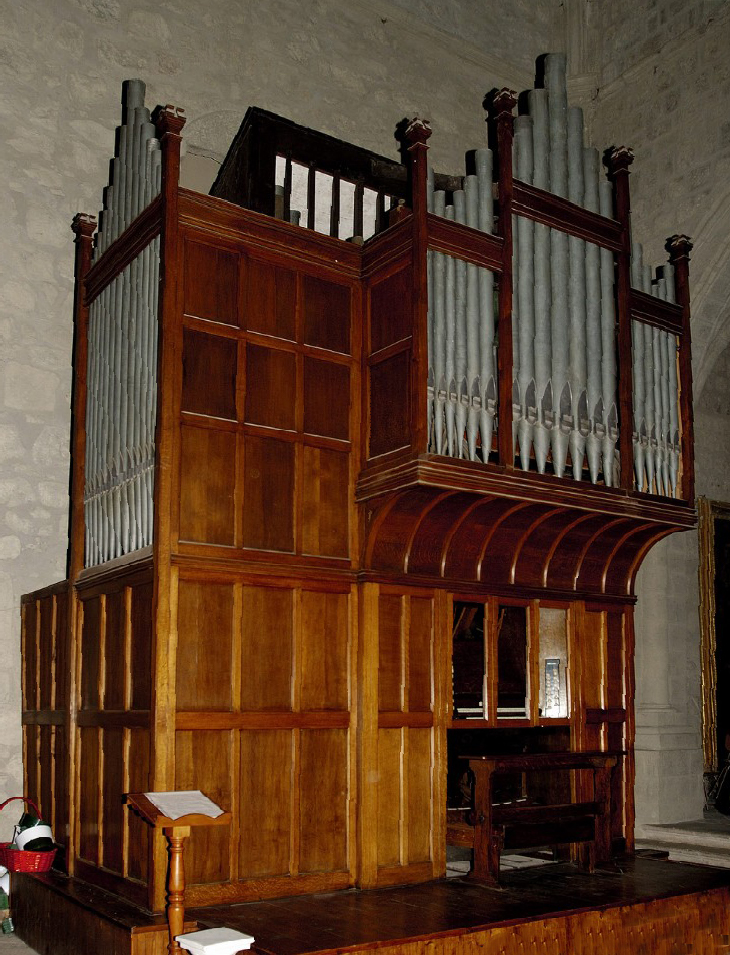 My organ work has been considerably reduced over the past twenty years, but some priests of a religious community I got to know during my diaconal stint in the Morvan have asked me to find and install an organ in the large medieval (heavily restored in the nineteenth century) church of Vermenton.

I have various resources for finding redundant organs in England, and I was precisely seeking a two-manual instrument with mechanical action, easy to dismantle and reassemble with a minimum of repairs or restoration and which can be transported in a 3 1/2 ton van which can be driven with a car licence. The typical specification involves four or five stops on each manual and a bourdon on the pedal. As I corresponded with those responsible for disposing of organs, the “successful” one is in Newington Green Unitarian church. I am due to be there with my hired van in the third week of January to take the organ down and bring it to France.

Newington Green Unitarian church is a handsome eighteenth-century building which underwent some modifications in 1860. 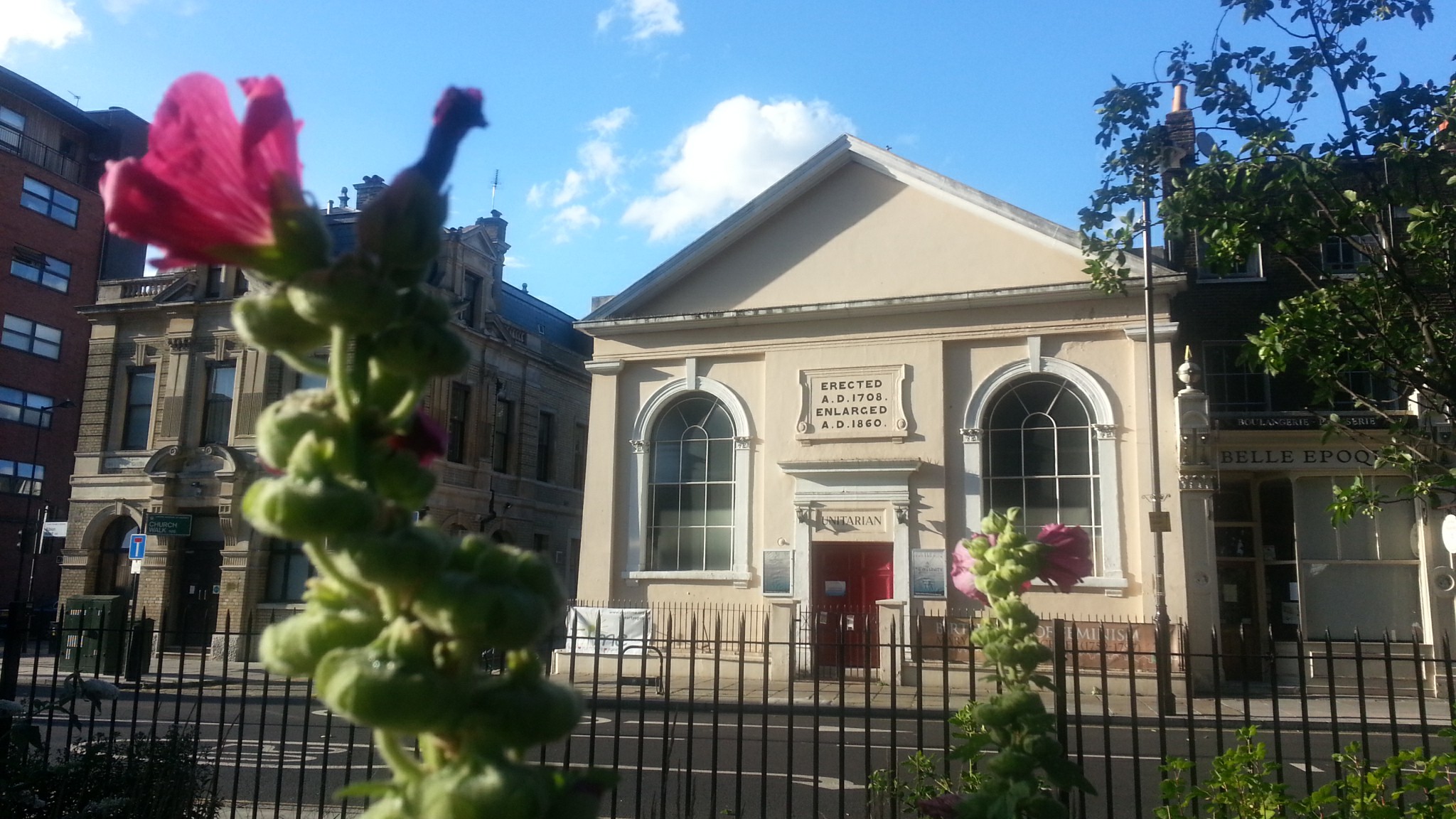 Here is the organ I am to move. 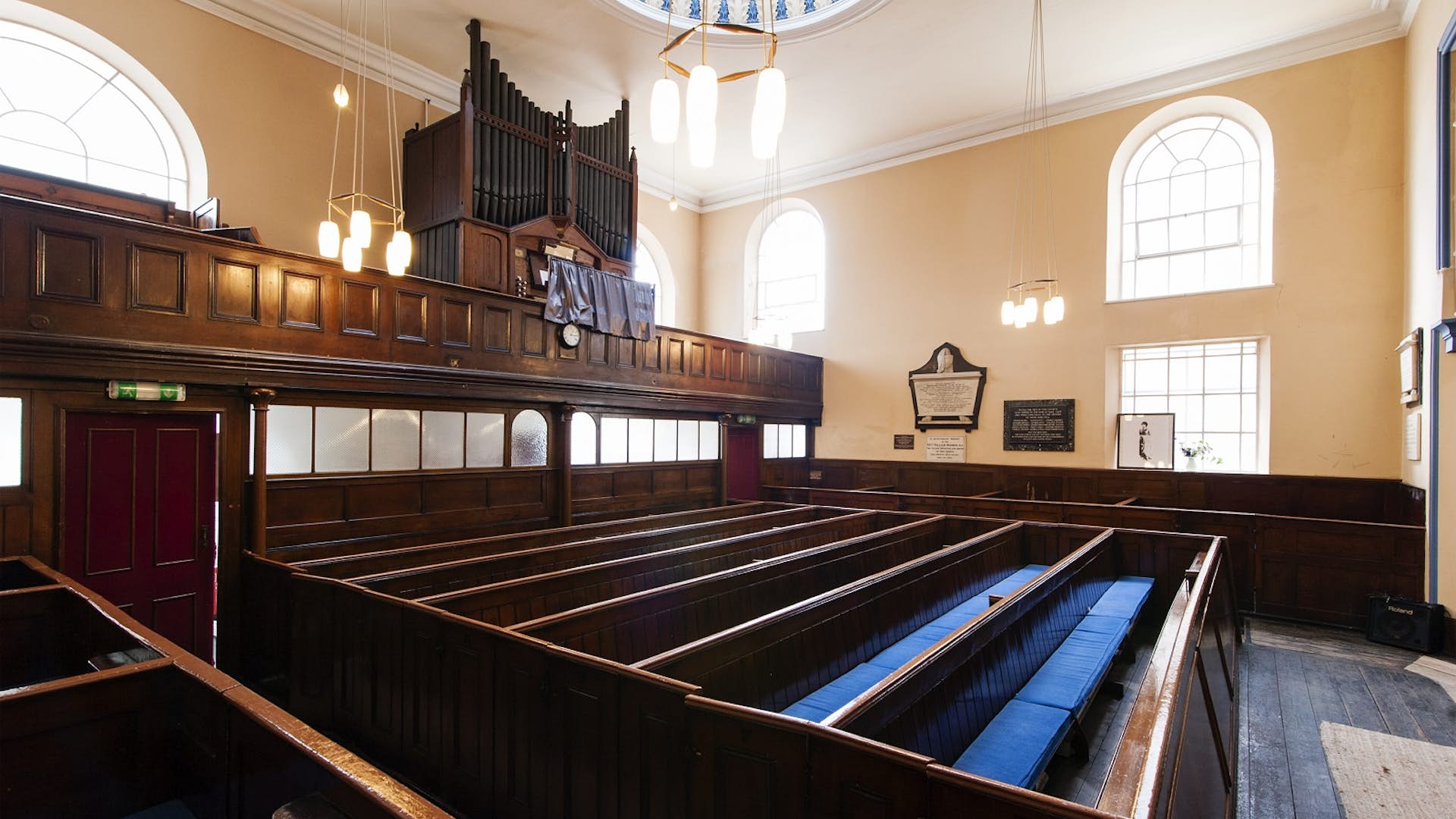 The instrument is basically Victorian, installed at Newington Green in 1902. It bears the builder’s plate of Henry Potter. The instrument was examined in the 1970’s by Noel Mander, a highly reputable London organ builder, who had no knowledge of Potter. Mr Mander surmised that Potter was a journeyman working for Bishop & Son. Manders did some work on the instrument, and when the bellows was opened, they found out that this instrument was built by Banfield of Birmingham in 1862, for Lord Calthorpe of Elvetham Hall. It is without any real tonal distinction, but I am confident that I could improve it by opening up the pipe feet a little to enhance the natural harmonics of the pipes. It was regularly tuned up to September 2016 and is still playable.

I plan to work from the Monday to the Friday morning so as to get back to Dover for the night ferry. Why are they disposing of this instrument? It is mainly because the church has received a grant for restoration of the building in a general state of wear and tear. I also suspect they will be removing the Victorian pews to create a more versatile space to be used for different social and cultural functions. They have a grand piano and use other instruments, and obviously have no need of an organ, which in any case would have to be dismantled for the work on the church. It will therefore have a new life in France.

This evening, I began to do some research on this community, because my father has spoken very kindly about one of his friends who is a Unitarian minister in Kendal. I also from time to time follow the blog of Adrian Worsfold, who is a Unitarian, which is more concerned with politics but occasionally discusses ecclesiastical eccentricities. I knew very little about Unitarianism, even though I had contact with the Quakers when I was at Wennington School in 1971. The two denominations are completely distinct. The name distinguishes them from Trinitarians, in that they deny the Trinity. There is one God, and Jesus was a good man and spiritual guide, but not God. In this, they are distinct from nearly all Christian denominations – approaching a more rigorous monotheistic notion of God like in Judaism and Islam. They also reject original sin, predestination and the inerrancy of the Bible. They are now the most liberal and radical of all Christian denominations. Unitarianism seems to be a reaction against some of the excesses of classical Protestantism. Its roots were in the mid sixteenth century in Transylvania and Poland. They faced fierce persecution from the Roman Catholic Church in continental Europe and the Anglican establishment in England.

One distinguished member of the Newington Green community was Mary Wollstonecraft, the pioneer of feminism, wife of the philosopher William Godwin, one of the forefathers of the anarchist movement and mother of Mary Wollstonecraft Godwin (who married Percy Byssh Shelley). Mary Shelley‘s best known work is Frankenstein. Unitarianism appealed to many Romantic authors and philosophers through its radical position in regard to establishment churches and dogmas. It seemed ideal for an anarchical mindset and a passionate desire to serve the cause of humanity and justice. Newington Green is located in the constituency of the Labour leader Jeremy Corbyn, who has received considerable publicity for his involvement in the Parliament debates over Brexit. Here, Jeremy Corbyn is interviewed in the Newington Green church about Mary Wollstonecraft.

Like many of the Romantics, like William Wordsworth, Madame Wollstonecraft was inspired by the ideals of the French Revolution. She also saw the work of the hard-line Jacobins and the guillotine bloodbath – and quickly returned to England in fear for her life. Whatever we may think about left-wing politics today, it is interesting to see a politician’s ideas rooted in the depth of Romantic thought and the profound vision of a new world and age. With this in mind, the allegation of Mr Corbyn calling Theresa May a “stupid woman” with a sexist overtone is quite striking, especially as he affirmed that he eschews all sexism and misogyny.

Returning to Unitarianism as a philosophical expression or religion in a very restricted meaning of that word, I see many themes with which I can sympathise (though I am a Trinitarian – to the relief of my Bishop!). One is a great intellectual freedom in interpreting sacred texts and the notion of the human conscience. It is also a theme of various forms of liberalism and modernism in the nineteenth and early twentieth centuries, largely arising from Romanticism.

The Newington Green community is quite surprising, now named New Unity. If you go to their site, you will be quite astonished by the fact that it defines itself as a non-religious church. I assume they are using the vocabulary of the average English person of our times, used to seeing religion as a source of intolerance, bigotry and violence. I assume that is what is meant. Also, they repudiate the idea of a supernatural God (what is “supernatural” for them – since I would soften the distinction made by classical theology between natural and supernatural). Anyway, let’s get ahead. It looks to me like a humanist philosophy aiming for the nobility of spirit I have often mentioned in my articles. Believe in Good, the idea being to seek the good in every person.

We believe that there’s potential for good in every person, no matter how wounded they may be, or how buried that potential may lie.

We believe that although today’s world is riven with injustice, we must always hope for – and work towards – a kinder, fairer future.

We believe that the world can be good – and can grow ever better. And this responsibility lies firmly in our own hands.

Why be a church community? The idea of a secular humanist church with an atheist minister is new to me, but there are aspects from which we other Christians could learn from rather than trying to take advantage of the rich and powerful of this world. This kind of idea is very widespread in the world, especially in South America with the basic communities and liberation theology. My criticism of those would be the fact that Marxism is a very flawed philosophy of human nature and analysis of economic systems like capitalism.

It promises to be a very rich experience for me as I discuss things with people as I pack organ pipes into rolls of newspaper and the wooden crates I have made. I am persuaded that institutional Christianity has a lot to answer for and many of its woes have been of its own making. I assume those people believe that Christ existed and had a beautiful message to convey, at least that. I will not be trying to persuade them that I’m right, but rather to understand how they relate to our modern world and whether they have any notion of transcendence. Perhaps the theme of Romanticism may serve as a bridge to enable us to understand each other and dialogue.

I look forward to this new adventure… I am again brought to that wonderful poem of Walt Whitman:

Down from the gardens of Asia descending radiating,
Adam and Eve appear, then their myriad progeny after them,
Wandering, yearning, curious, with restless explorations,
With questionings, baffled, formless, feverish, with never-happy hearts,
With that sad incessant refrain, Wherefore unsatisfied soul? and Whither O mocking life?

Ah who shall soothe these feverish children?
Who Justify these restless explorations?
Who speak the secret of impassive earth?
Who bind it to us? what is this separate Nature so unnatural?
What is this earth to our affections? (unloving earth, without a throb to answer ours, Cold earth, the place of graves.)

Yet soul be sure the first intent remains, and shall be carried out,
Perhaps even now the time has arrived.

After the seas are all cross’d, (as they seem already cross’d,)
After the great captains and engineers have accomplish’d their work,
After the noble inventors, after the scientists, the chemist, the geologist, ethnologist,
Finally shall come the poet worthy that name,
The true son of God shall come singing his songs.

This entry was posted in Uncategorized and tagged Liberalism, Music, Philosophy, Romanticism, Unitarianism. Bookmark the permalink.