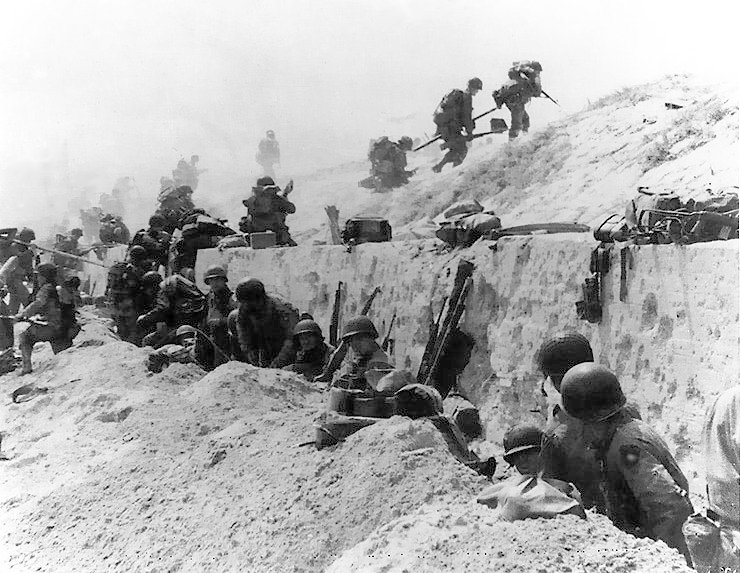 On this day commemorating the seventy-fourth anniversary of Operation Overlord, commonly known as D-Day, we have just about the same weather, perhaps a little less wind. Europe is presently plagued with unstable and stormy weather due to a kind of “witch’s cauldron” effect of a north-east anticyclone and a colder front from the Atlantic.

My title today is based on the exclamation of one of the more perceptive German officers anticipating an attack on France by the Allies in the worst weather. Many of us gained basic knowledge of D-Day through watching The Longest Day, a monument of modern cinema with an assortment of great stars like John Wayne, Richard Burton and Bourville. The film is thought-provoking. A more realistic view is given in Saving Private Ryan – with its intolerable blood and gore which are the reality of modern warfare.

The Battle of Normandy was the beginning of the successful invasion of Nazi-occupied Europe, launched on 6th June 1944.  The casualties were horribly heavy, not only Allied and enemy servicemen but also the civilians killed by the heavy marine artillery firing at random through the fog and the heavy rain.

Oh, yes, it was a just war, a crusade against the dark heart of Nazi Germany. It had to be fought, even at such heart-breaking losses. I live in the area, where few towns survived the bombing needed to shake the Germans out of their defensive positions. Le Havre was levelled, as was much of Rouen near the Seine and the railway marshalling yards. Rouen Cathedral was almost totally rebuilt in the 1950’s. Every time we see the réconstruction architecture of the 1950’s and 60’s, we can only imagine what was there before. Caen and Ouistreham were almost levelled, as were Falaise and Bayeux. I know the area of Omaha Beach well and have visited most of the museums and sites.

I offer my prayers for the thousands of fallen servicemen of both sides (there is a huge German military cemetery in the Bessin region) and civilians. Let us pray that such destruction, as has happened in Syria, never strikes Europe again! Very few veterans from D-Day are still alive, so it falls on us to preserve their memory, pray for the dead and treasure our freedom for which they died.

This entry was posted in Uncategorized and tagged Prayer intentions, War and Peace, World War II. Bookmark the permalink.